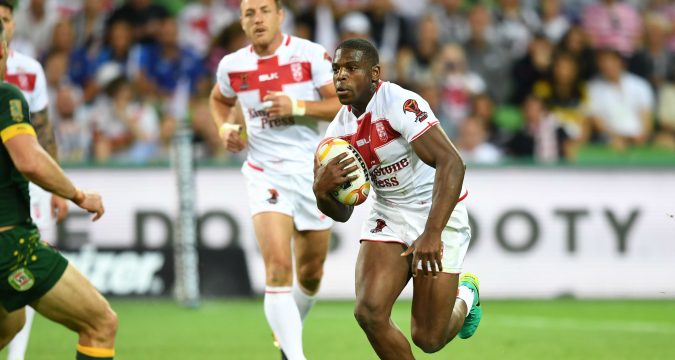 Jermaine McGillvary’s World Cup could be over after being charged for other contrary behaviour.

The England winger has been cited for an alleged bite on Lebanon captain Robbie Farah during their 29-10 victory over The Cedars on Saturday.

Farah made a formal complaint to referee Ben Thaler during the match and a match-review panel has deemed the incident worthy of a charge after it was put on report.

McGillvary will face a disciplinary hearing on Wednesday, with the outcome of the hearing set to determine whether his tournament is over. The case will be heard by a three-person judiciary panel.

Players found guilty of biting can face a ban as long as 12 weeks, which would leave the Huddersfield winger on the sidelines for the start of the Super League season too.

“I made a complaint on the field and I’ll leave it at that,” said Farah when asked about the incident.

“Things happen in a split second on the field and you react.

“I don’t think I need to say much else. There is a bit of footage there. It’s pretty clear for everyone to see what happened on the replay.”