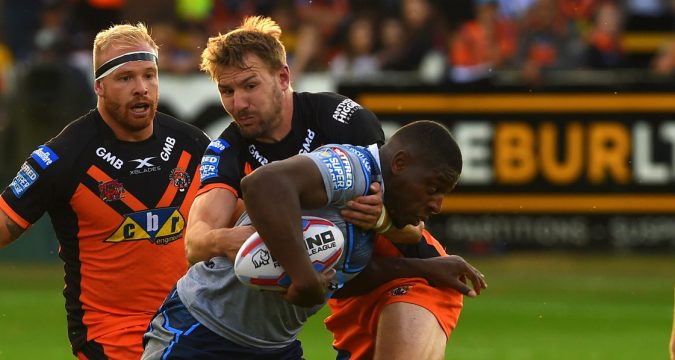 The England winger has put pen to paper on a new deal with the Giants that will keep him with the club until the end of the 2022 campaign.

The Giants have tied down the 30-year-old amid plenty of interest from the NRL, after his exceptional performance in last year’s World Cup.

Huddersfield have used up some of their spare salary cap space to offer the former Albert Goldthorpe Rookie of the Year a new and improved deal, that could well take him to the end of his career.

“I’m over the moon to re-sign with the club,” said McGillvary.

“When I was a kid growing up I didn’t know where the journey would take me, whether I was going to make it or what I was going to do. I quit all my jobs and it was all or nothing. I wasn’t getting paid, I moved away from where I lived and sacrificed a lot so that I could fully focus on trying to make it as a rugby player. In the end it’s worked out for me.

“I’ve had some good times and some low times, but more often than not it’s been great times. I’ve accomplished some big milestones, playing for my hometown club in Super League and the Challenge Cup as well as being called up by my country to represent England.”

Huddersfield Giants managing director Richard Thewlis said, “Jermaine was without a doubt the star of the World Cup from an England perspective and came back to us with an enormous profile which we’d hope to see further enhanced in the series with New Zealand.

“We were aware that NRL clubs had been sniffing around and we all understand the salary cap differentials in play can make retaining players difficult.

“Our budgets and cap had been fixed by this point so we did approach the RFL to help Jermaine by making him one of their centrally funded players which seemed to us an obvious fit as he had clearly done the majority of the media/promotional work down under and was both “the story” and “the face of England RL” alongside his wonderful playing performances.

“The request for financial support for Jermaine (which is enjoyed by other players and clubs) was not forthcoming and so the burden fell solely upon us and we were able towards the end of the season to both improve and extend Jermaine’s contract with us which was great news for all concerned and I am sure will be well received by the supporters.”

Meanwhile, the Giants are set to bolster their squad for 2019 with the signing of talented Bradford youngster Reiss Butterworth, League Express can reveal.

Butterworth left the Bulls earlier this season to join Super League side Castleford on a loan deal until the end of the season, as part of the agreement that saw prop James Green move the other way.

At the time, Castleford’s director of rugby Jon Wells said: “Reiss joins us initially until the end of the 2018 season and he understands that this is an opportunity for him to earn a contract with the Castleford Tigers. It’s a challenge I know he is very much looking forward to.”

However, Butterworth has now returned to the Bulls and recently featured for their reserve side, and the Giants have made their interest in the 19-year-old known.

And League Express understands Huddersfield are set to pay a transfer fee to Bradford for Butterworth, who will join Simon Woolford’s side on a permanent arrangement in time for the 2019 season.