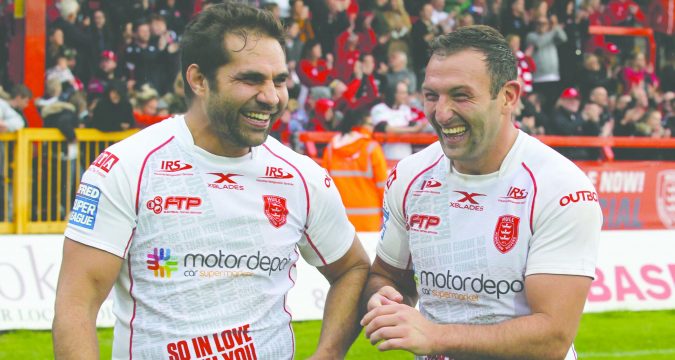 Jimmy Keinhorst, Ryan Lannon and Weller Hauraki have all been confirmed as Hull Kingston Rovers players for 2019 by the club’s head coach, Tim Sheens, after everyone associated with the club heaved a giant sigh of relief following their 30-0 victory over Widnes Vikings on Sunday.

League Express revealed earlier this year how Keinhorst and Lannon were heading for the Robins next year, while Hauraki had also been rumoured with a move to the club. And after they secured their top-flight place on Sunday afternoon Sheens admitted all three have signed deals to join the club next season.

“There are two forwards in there (Lannon and Hauraki),” Sheens said.

“Jimmy Keinhorst gives us another option to play centre too.” Sheens also admitted the club will now begin talks with all their off-contract players – including utility Maurice Blair, who filled in at half-back superbly again on Sunday afternoon.

The Robins’ plans were thrown into turmoil after just seven minutes on Sunday when Todd Carney went off injured – but Blair partnered Danny McGuire expertly to guide the Robins to safety.

“We’re going to have a chat with Bobby,” Sheens said of Blair. “His versatility has been brilliant for us.

“We now know where we’ll be and where the budget will be – it’ll be a Super League budget. We also know who’s off-contract and what we’re doing, so we need to start talking to players.

“We’ll start interviewing towards the end of the week; the presentation night has been brought forward, so the boys can get a clear five weeks off.”

Sheens was happy with his side’s performance in securing their Super League status. “It was a good emphatic win but it still had my heart going with 15 minutes to go.

“They kept me on my toes. But right now I am absorbing the fact we have survived and it is going to be a much more pleasant presentation night this week than it would have been.

“You are talking about your livelihood and the livelihood of the club. You can lose a Grand Final and not have as much stress as that. Fortunately, we got through.”

Meanwhile Hull KR captain Shaun Lunt is still recuperating in hospital after being admitted with bacterial meningitis last week, although the Rovers skipper’s Twitter activity suggests that he is in good spirits.