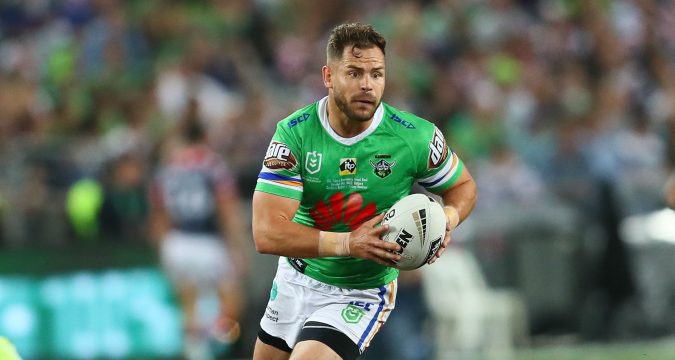 Jermaine McGillvary believes Aidan Sezer could be the difference for Huddersfield after leaving a mighty impression during pre-season.

The Canberra halfback was made Huddersfield’s first-ever marquee player after agreeing to join the Super League outfit fresh off playing in the NRL Grand Final last year.

Sezer has spent several weeks with his new club and will make his debut in McGillvary’s testimonial match against Halifax this Sunday.

Plenty is expected of the 28-year-old, but McGillvary believes Sezer will fill the void left by another former Giants halfback who guided the club to the League Leaders’ Shield in 2013.

“I won’t lie, he is something else.

“He’s another Broughy, there’s a lot on his shoulders but he’s the type of character that laps it up. He shines in training, it’s after five or ten rounds that’s important but you can see why he’s the first-ever marquee in our history and why you pay the money to the leaders, not the wingers like me.

“He oozes class, we’ve missed it since Broughy because on his day he was world class too. Since Danny Brough left we’ve not had someone week in, week out to lead us around the field. Everyone knows how quality Broughy was at that, you can say what you like about his temperament or whatever but he was pure class, and he is too.

“From day one, he’s not tried to settle, he’s got stuck right into it from day one. He’ll get better when he knows everything too.”