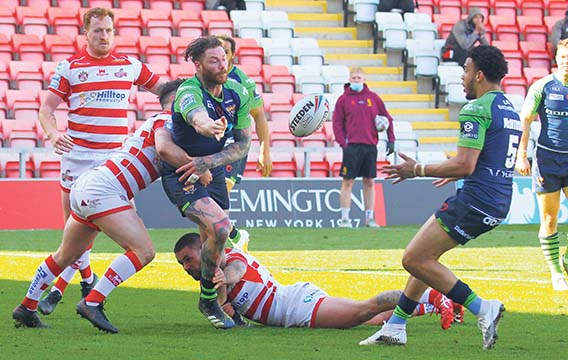 Chris McQueen is aiming to carry on wearing claret and gold again in 2022.

Despite the lifestyle limitations of the pandemic, Huddersfield’s versatile former Queensland and England player, who signed in September following his release by Wests Tigers, has found Yorkshire to his liking.

After penning a short-term deal to cover the remainder of the 2020 season, when he made nine Giants appearances and scored two tries, the Brisbane-born ex-South Sydney Rabbitohs and Gold Coast Titans man signed a fresh contract in November.

And McQueen, who represented Queensland six times from 2013 to 2014 and played for England, for whom he qualifies through his father, in 2017, has revealed that featuring in 60 per cent of this year’s matches will cement another campaign at the club.

So far, the 33-year-old has a 100 per cent appearance record, starting the season in the second row and playing the last four matches, including Friday’s Challenge Cup quarter-final defeat by St Helens, in the centres.

He has scored three tries in those seven matches, with a trip to Warrington next Monday, May 17, next on the agenda.

Ian Watson’s side will be aiming to make it back-to-back Super League wins after losing to Hull, Catalans, Hull KR and St Helens before beating Leeds 14-13.

“We’d like a bit more success but we’ll keep working hard and get there,” said McQueen, who won the NRL Grand Final with Souths in 2014, when Canterbury Bulldogs were beaten 30-6.

“It’s been a bit difficult off the field. We’ve been in lockdown and it’s been the coldest winter I’ve ever experienced.

“But certainly around the footy side of things, I’m really enjoying it.”