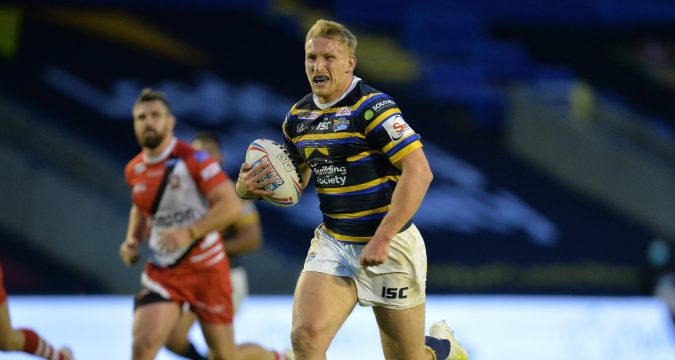 Not many players in Rugby League history head into a major final with the public backing of their country’s foreign embassy, but that is exactly what Mikolaj Oledzki will do this weekend.

The Leeds Rhinos prop was sent best wishes from his native Polish Embassy last week, as he prepares to become the first player born in that country to feature in a Challenge Cup Final.

It is the latest chapter in a fascinating story for the 21-year-old, who could speak little English and preferred gymnastics and swimming when he arrived in this country at the age of eight.

Now he is set for his first showpiece event and there will be pockets of his family in Gdansk and Warsaw tuning into Saturday’s clash with Salford.

“That was a lovely touch from the embassy, really nice and I’m grateful to have the support from them,” Oledzki said.

“I’m sure everybody back home will be watching, although there won’t be any parties going on, given the Covid rules. I’m sure they’ll be able to get a stream going over there and I know they all want me to do well.

“Even when I started to play rugby at about 13 or 14, if you’d told me I’d be on the Wembley stage at the age of 21 I’d have certainly not believed you. It’s awesome; you couldn’t write it.

“When I reflect back on my rugby career, I never thought I’d get to play at Headingley on a Friday night, never mind at Wembley. It’s been an amazing journey in Rugby League for me.

“Rugby League is slowly emerging in Poland and it would be great if it could expand. It’s a great sport to play and it’s one where you just need commitment, determination and hard work to be a success.

“Skill helps, but I’ve never been a skilful player, although I’m trying to improve on that. But I was always willing to work hard from a young age. That’s got me to where I am now and it shows there are opportunities there.”

Oledzki has also revealed how Rhinos coaches Richard Agar and Jamie Jones-Buchanan have toughened his game up over the last 12 months.

The frontrower had started the majority of his career games off the bench before this season began, and also had spells with Bradford and Featherstone to aid his development.

But he led the Rhinos’ impressive semi-final win over Wigan from the front as one of the starting 13, and he is being tipped to do the same against Salford this weekend.

“Starting from last year there was a lot of things I needed to improve on that weren’t quite up to scratch. We’ve had a lot of discussions and time to analyse and work on certain things. Rich has always been a big believer in me as a young player; even if I didn’t have my best game he would always give me a chance to prove myself again.”

Asked what he needed to improve on, Oledzki responded: “My decision making, my tackling and I probably wasn’t tough enough in the middle. I had to become a bit more solid and tougher with my defence, and JJB has helped massively with that too.

“I’ve worked really hard on it and that’s really showing this year. JJB is still the same person I played alongside – a great individual and a legend of a player and a bloke.

“He’s a great coach to have around; he’s really enthusiastic and works hard to make sure everybody knows exactly what their role is. If I ever have a question or need help then he’ll come with a lot of resources and analysis ready for me to apply.”

He added: “They’re a great team coached by a great guy who gets the best out of the players individually and as a team. They’re a team that just doesn’t go away and they play for the full 80 minutes. We know we have to put in a big performance for the full 80, but that’s a challenge I’m looking forward to.

“I’ve never played in or even watched a game at Wembley and that brings extra excitement for me. Some people never get to play at Wembley, so it could be a once-in-a-lifetime opportunity and that’s exciting. It will be tough with the Leeds fans not being there, because the atmosphere they create for us is amazing.

“But Covid is a serious thing, and everybody needs to follow the rules and regulations. I’m sure every player would love at least their family, kids, partners or parents there. This year that won’t happen, but we’re all professionals and just need to turn up and give 100 per cent.”