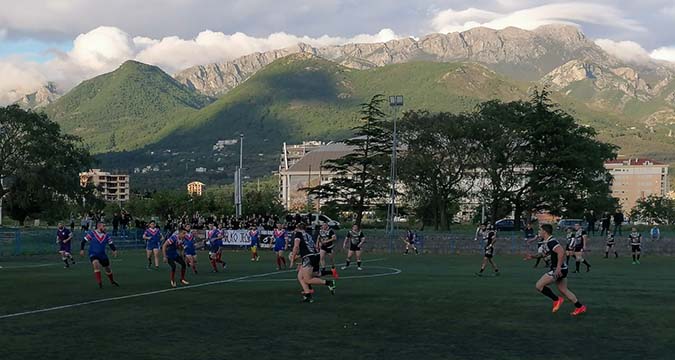 Fresh from their win in the Serbian Challenge Cup, Partisan 1953 travelled to the Adriatic Coast city of Bar in Montenegro to face Southern Region in the fifth round of the Serbian championship.

The match saw an initial cooperation between Montenegro RL, which has just been awarded Observer status by the European Rugby League, and neighbours Albania, with eight players from Tirana RL being given the chance to play on their pandemic return.

Arnaldo Telo, president of Albania Rugby League accompanied the players. “It was a great cooperation,” he said. “This was our first return to rugby league after the shutdown. I want to thank the Montenegro Rugby League for the opportunity, it was an amazing experience for our players. We hope to continue this relationship and help to grow the sport in this part of the region. We are working towards state recognition for our organisation and hope to have that granted by the end of August or early September. We are also still in close contact with Greece RL for the Tirana team to play in their championship when the borders reopen and it is safe to do so.”

Montenegro RL representative and South Region director, Jovan Petrovic said: “We are moving ahead. Now we are going to be able to organise more matches, form more clubs here with the aim of setting up a four team domestic league. We are also planning to make our international debut against Serbia soon.”

Partisan, who won 72-8, were noisily supported by over 200 fans of the club from Bar, some with flares and including a band, who vociferously cheered their team throughout creating a terrific atmosphere.