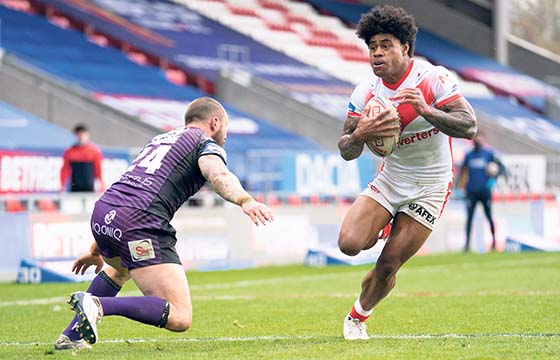 Kevin Naiqama looks set to depart St Helens at the end of this season and return to Australia.

The Fiji international centre, who joined Saints in 2019 from Wests Tigers, is off-contract this year.

At 32, and with the club struggling to juggle its salary cap, the ex-Newcastle Knights and Penrith Panthers man is expected to leave.

League Express had an interview request with Naiqama recently declined by his club. It is believed the Sydney-born Fiji skipper will head back down under once this season is finished.

Should that be the case, he will look to sign off his stay in England in style at this Autumn’s World Cup.

Fiji will prepare for the tournament with a warm-up match against England at Rochdale on Friday, October 15.

Naiqama, who played in both Saints’ Grand Final wins in the last two seasons, is one of a number of coach Kristian Woolf’s squad coming out of contract.

Coote’s future is unclear, while Fages is expected to join Huddersfield for the 2022 campaign. Those back-to-back Grand Final wins have increased the value of many of Saints players, and the club has already re-signed winger Regan Grace and prop Alex Walmsley this year. Naiqama has been a fine Saints servant, scoring 27 tries in 49 appearances going into Friday’s home Super League clash with Hull.

Saints have a quick rematch with the Black and Whites, this time at Leigh, in the semi-final of the Challenge Cup on Saturday.