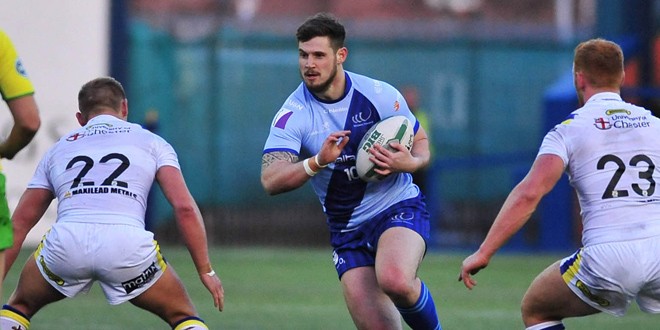 Kavanagh, 26, has been with the Vikings since 2008, when he joined the club on loan from Wigan, subsequently signing a full-time contract.

Now, with 148 appearances under his belt, and after a World Cup campaign with Scotland, he is looking forward to some glory with the Vikings.

Kavanagh said: “I’m really enjoying my Rugby League at Widnes and I’m excited about the future and what we could achieve here.

“I’m over the moon to sign. It’s good that it’s now out of the way as I can concentrate on my Rugby League. I’m happy with my form at the moment but there’s much more to come from me and I’m keen to show the supporters what I can do.

“Widnes is a really big club and you can see the great strides we’ve made since coming into Super League and what’s happening now.

“The club has grown massively. Steve O’Connor has been central to that and we have got a great culture now and hopefully we can start challenging for trophies.

“We want to be up there and all the boys are working hard to get us to the top.”

Vikings coach Denis Betts said: “Ben’s been in our thoughts throughout the process of signing and retaining players. He’s established himself in the Scotland squad and he had a great World Cup but also there’s still a lot of potential in him.

“He’s a big man who has lots of ability and skill and we need to keep extracting that out of Ben and that’s only going to benefit him and make the team better.

“Ben is slowly maturing as a frontrower. He had a small hiccup in his career but he’s come back stronger each year. He has been one of our most consistent performers in the past and we’re looking forward to him finding the form that made him a huge hit in the World Cup for Scotland. “He can get a lot better and I’m looking forward to working with him to achieve that.”