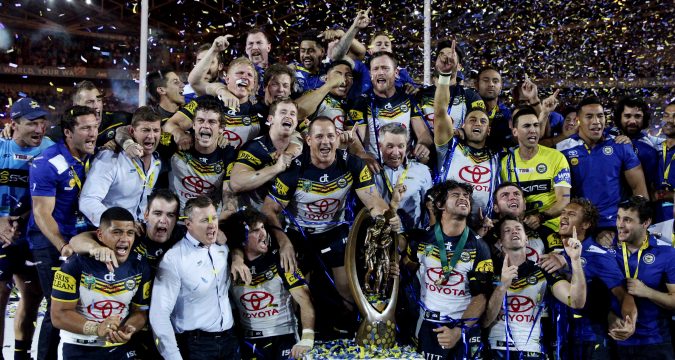 North Queensland Cowboys have agreed to part ways with their head coach Paul Green, with the break coming immediately, just a day after the Cowboys gave a much improved performance in their 22-10 defeat to Penrith Panthers on Sunday.

The decision had been made several days earlier last week, but Green had wanted to stay on for the visit to the Panthers Stadium.

After ten rounds of this season’s competition, the Cowboys, who won the NRL title (pictured) under Green in 2015, are in twelfth place on six points, four points outside the top eight.

In announcing the news, Green admitted that after discussions with the club management it was time to move on.

“After seven years as head coach, it is with a heavy heart that I make this announcement,” he said.

“The Board feld that the club was at a juncture where they needed to move in a different direction, and I can only respect their views.

“Whilst this is obviously disappointing news, I am grateful to the Board for allowing me to lead this club whilst creating some lifelong memories. I will use this next period to freshen up, spend some time with my family and assess options before moving on to the next coaching role.”

Green’s assistant Josh Hannay will take charge of the team for the remainder of the 2020 season while the club begins its recruitment process.

Green is the third NRL coach to leave his job this year, following in the footsteps of Stephen Kearney (New Zealand Warriors) and Dean Pay (Canterbury Bulldogs).