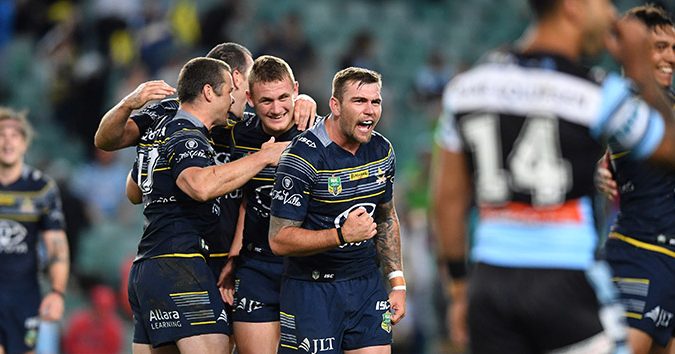 North Queensland dumped the reigning Premiers, Cronulla Sharks out of the NRL Finals with a stunning 15-14 comeback win.

Cronulla were ahead from the outset. After Antonio Winterstein fumbled the ball when under pressure in the ingoal, Chad Townsend was on hand to ground the ball. Maloney’s conversion and a further penalty extended the Sharks’ lead to eight.

The Cowboys weren’t to be kept scoreless in the half however as Ethan Lowe struck a penalty goal when he was impeded by James Maloney, a penalty that saw Maloney spend ten minutes on the sideline.

North Queensland brought themselves back to within two when Morgan’s floating pass found Kyle Feldt in space and the winger finished well in the corner.

It wasn’t long before Cronulla struck back. Townsend grubbered into the corner for the returning Jack Bird to score. Maloney’s conversion took them back out to an eight point lead.

The Cowboys wouldn’t go away. Jason Taumalolo, who made 256 metres in the match, burrowed his way to the ground despite the attentions of multiple Sharks defenders.

With five minutes to go, North Queensland were level. A ball steal gave Ethan Lowe an easy chance to level the scores.