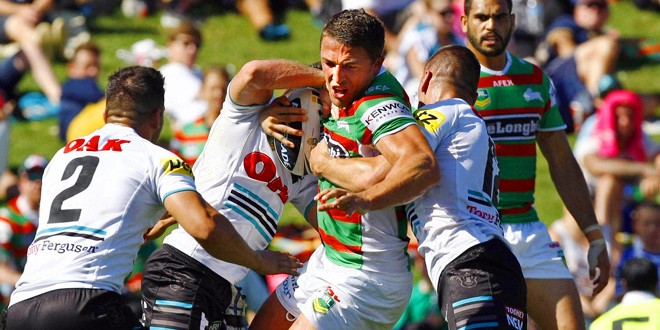 The NRL has released the 2016 NRL Telstra Premiership Schedule, claiming that the 2016 schedule is designed primarily to benefit the game’s supporters.

For the first time in the history of the competition, every match in every round will be broadcast live.

Following the new broadcast rights deal, which was also announced on Friday, the 2016 season will see matches scheduled on Thursday nights in 18 of the 26 rounds.

But there will be no increase in the number of five-day turnarounds.

And NRL Head of Football Todd Greenberg claims that the early-season blockbusters have been deliberately scheduled for family-friendly timeslots.

They include Sam Burgess’s return for South Sydney against traditional rivals Sydney Roosters in Round 1 on Sunday afternoon, as well as Premiers North Queensland’s season-opener, which will be played on Saturday, March 4, against fellow finalists Cronulla.

Other highlights of the 2016 schedule highlighted by the NRL include:

Kieran Foran’s Parramatta Eels opening the season on Thursday, March 3, against Grand Finalists Brisbane Broncos at Pirtek Stadium, with another home match against the Cowboys in Round 2.

The Grand Final rematch between North Queensland and Brisbane on Good Friday at Suncorp Stadium.

An ANZAC Round which will include traditional blockbusters St George Illawarra v Sydney Roosters and Melbourne v Warriors on ANZAC Day.

Greenberg also claims that player welfare was a strong consideration in negotiations with broadcasters Channel Nine and Fox Sports.

“We wanted to ensure both fans and players benefited from the schedule,” he said.

“Importantly, we worked hard to ensure there was no increase in five-day turnarounds following feedback from the players.

“We will also see some huge blockbusters over the opening rounds of the Premiership at family-friendly times.

“We targeted Sunday afternoons in Sydney to ensure more people were able to see some of our biggest clashes over the opening few months of the competition.

“We worked with the broadcasters and Cowboys to ensure the club got its wish of a Saturday night game in Round One rather than a traditional Thursday night for the Premiers – to ensure their fans who travel long distances are rewarded and given the opportunity to see their team open up their Premiership defence.

“And Good Friday will see the traditional South Sydney-Bulldogs match as well as the Grand Final rematch between Brisbane and North Queensland.

“We will also be taking the game across the full breadth of Australia and New Zealand. We will see matches in Darwin, Perth, Bathurst, Cairns, Gosford as well as Christchurch, Wellington and for the first time New Plymouth.

“I’d like to thank both Channel Nine and Fox Sports for their hard work in ensuring we have such a strong draw and importantly one which benefits our fans, as well as the stars who will be entertaining them every week.”

The full schedule can be found at www.nrl.com.