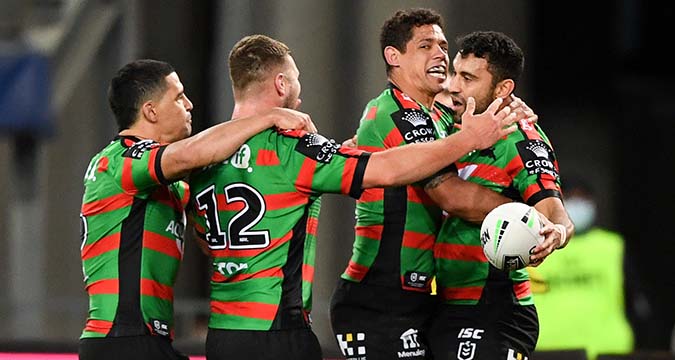 South Sydney can win the Premiership
If they play like they did against Sydney Roosters in the Finals, they’ll beat anyone.
They racked up an insane 60-8 scoreline against the Roosters on Friday, with Alex Johnston scoring five tries to jump in front of Kyle Feldt on the try scoring list.
They were in imperious form. That win earned them a home Final against Newcastle to start. They’ll be favourites.

Brisbane deserved the spoon
Their performances since lockdown have all been so weak. They quite often started games well but weren’t able to keep that intensity going. Too often, they capitulated in the final quarter of games and that was the case once again against North Queensland.
10 points up and then level heading into the final 20, they ended up losing by 16 points.
Things can only get better for their fans next year.

Gold Coast are ready for 2021
As well as South Sydney’s result, Gold Coast’s was the other standout one. They completely destroyed a good play-off team. The Knights may not be in the best form but the Titans took it to them with little to play for and they scored some breathtaking tries too!
Five wins in a row to end the 2020 season in ninth position. Justin Holbrook couldn’t have wished for much better.

Melbourne have great depth
In preparation for the Finals this week, Melbourne rested almost all of their first-choice players. Ryan Papenhuyzen was named captain of the side full of young or fringe players and they were unlucky not to take home the win against the Dragons.
In the end it was Papenhuyzen’s four goal kicking misses which cost them.
It’s been another season of mediocrity for St George.

Warriors are 2020’s heroes
Without New Zealand Warriors’ sacrifice, this campaign would never have happened and the whole Rugby League community is grateful for their players and staff leaving home and travelling to Australia to keep us entertained.
They got themselves an impressive win in their final game too against Manly. Adam Keighran starred scoring a hat-trick from centre and they did it without Roger Tuivasa-Sheck in the team.

Eels require more for Finals success
To be fair to them, they keep on picking up the wins and have managed to secure themselves third spot after the regular season but you get the feeling that there are other teams better positioned for winning the Grand Final.
The Eels will need to travel north to Queensland to oust the Storm and then, if they lose, will face a winning team from the elimination Finals at Bankwest.

No let up for Penrith
With the minor Premiership secure and a game against the Bulldogs who have only won three games all season coming up, you’d think the Panthers might take it easy. But they turned the screw on the lowly Dogs and keep them scoreless and ran in 42 points too.
They now have an incredible 15 wins in a row but do face the reigning Premiers Sydney Roosters in the first week of the Finals who are sure to be fired up after they were ruthlessly dispatched by the Rabbitohs last week.

Canberra take bragging rights ahead of Finals clash
In a quirk of fate, Cronulla and Canberra faced off in the final round of the regular season before they battle it out again in the first week of the play-offs.
Canberra took the bragging rights in impressive style considering the number of changes they made to the team. There were several unknown names in the starting team and on the bench but a good first half set them up for victory.
It’ll be a very different game this week, though, in the capital.