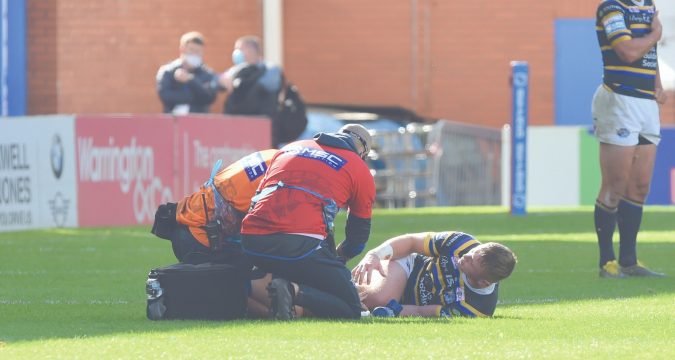 There was a touching moment during Leeds’ victory over Hull Kingston Rovers when Rhyse Martin went to console Harry Newman as he was lying on the pitch in agony after suffering a horrific double leg-break.

The backrower went to support his team-mate as he screamed in pain after suffering the shocking injury.

Newman clenched tight the hand of Martin as he tried to cope with the pain he was enduring.

The centre was ultimately stretchered from the field and now faces several months on the sidelines after breaking his tibia and fibula.

But Martin has revealed that the sheer pain of the injury wasn’t at the forefront of Newman’s concern as he was lying prone on the field.

“The poor fella, I don’t think I’ve seen someone in so much pain,” said Martin.

“But the first thing he said to me was he was going to miss some games and you could tell how upset he was by that.

“It was tough; the injury itself was horrible to see but he just needed someone to be there and he was in so much pain. To be honest, I don’t think he realised who it was. But he needed someone to help him through it and be with him.

“Being so young, he’s lucky he has time on his side, but you can see how much playing means to him and how much he loves playing for the club. He’s great to have on the right edge; you never know what you’re going to get from him, but he’ll pull through this and be better when he’s back.”

Leeds coach Richard Agar is set to provide an update on his condition after originally saying he is set to miss three to six months of action.

Meanwhile Newman himself posted his thanks on Twitter to those who had wished him well.

“Thanks to everyone for the support and messages received since yesterday. Not had chance to reply to you all but it means a lot and I am determined to come back fitter and stronger. Thanks to @leedsrhinos medical team along with @hullkrofficial. 2021 I’ll be back,” he wrote.