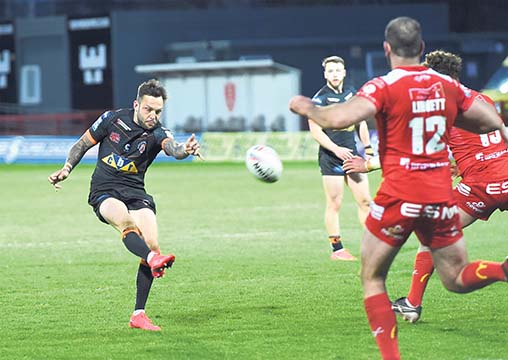 Castleford Tigers halfback Gareth O’Brien proved his mastery of the art of winning golden-point games once again today at Headingley, landing the winner three minutes into golden-point time, giving the Tigers a 19-18 victory over Salford Red Devils after Salford had equalised in normal time right on the hooter.

Salford opened the scoring in the 15th minute when Harvey Livett touched down a superb kick to the line by Kevin Brown, with the video referee confirming the decision and Livett converting his own try.

Daniel Smith responded on 24 minutes, burrowing his way over the line between the posts for Danny Richardson to level the scores.

Liam Watts got over the line but lost the ball when trying to ground it, but soon after that Livett scored his second try when he took a nice ball from James Greenwood and ran a great line to touch down, and again he converted his own try on 35 minutes.

Just before the interval Peter Mata’utia scored after some smart work by Watts and Richardson’s conversion levelled the scores at 12-12 at half-time.

Castleford took the lead in the second half with a try from Michael Shenton converted by O’Brien.

But things looked bad for the Tigers when O’Brien was sinbinned in the 66th minute, followed by Liam Watts on 74 minutes and Salford took advantage when Lee Mossop touched down with seconds remaining, for Livett’s goal to level the scores.

But when Kevin Brown failed with a field-goal attempt from 40 metres, which was charged down by Paul McShane, the Tigers were able to establish the field position or O’Brien to land yet another winning field-goal, just as he did in the previous round against Hull Kingston Rovers (above).