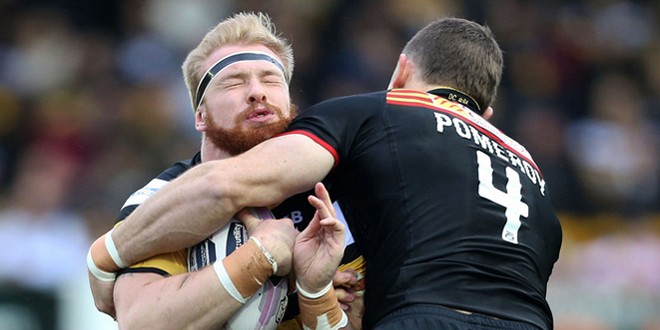 Castleford Tigers forward Oliver Holmes has handed the club a major boost, as he has signed a new two-year contract with the West Yorkshire club.

The 21-year-old is now contracted to the club until the end of the 2016 Super League season, having previously been out of contract at the end of this season. He has already played 73 times for the Tigers, and is one of a group of youngsters in the current squad to have emerged through the club’s high-profile academy setup. He has already appeared nine times for the club in 2014, and admits he is delighted that the club have shown faith in him by handing him the new deal.

He said: “I’m happy with how I’m playing and that shows by being rewarded with the new contract. Daryl Powell has shown a bit of faith in me as I’ve started all but one of the games this year. There are still bits of my game that I’m looking to improve and that’s what I’ll be working on in training.

“I’ve got to push on now; I’m going to be giving it 110% every week because that’s the player and person that I am and that’s what I should be doing week in, week out. We want to be winning games and putting in that type of effort is the way that’s going to happen.”

Daryl Powell said: “I am delighted that an outstanding young player who has risen through the club’s development system has decided that his future lies with the Tigers.

“Oliver is a quality player and individual whose game is growing consistently and will continue to do so as he works so hard at his game.

“We saw his value to the team in a tough game versus St Helens last weekend and I’m looking forward to helping him develop his ability in the coming seasons.”