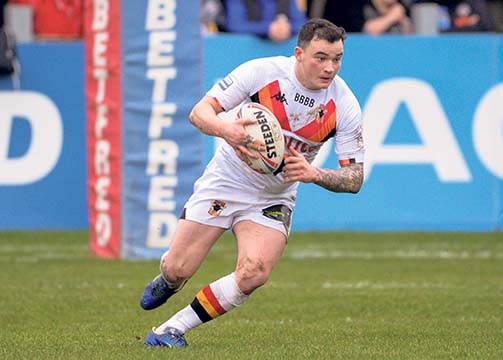 Fans may be returning to grounds – but selected matches from the Championship, League 1 and the 1895 Cup will continue to be streamed live on the RFL’s OurLeague app.

That follows the streaming of seven games over the weekend.

The four matches on Sunday are available for the usual early-bird price of £4.95, rising to £10 on the day. A weekend pass of £20 will also be available.

Home clubs will also provide free streaming to season-ticket holders, where applicable.
Last Monday produced the busiest 24-hour period of the year for OurLeague – and the fifth-busiest ever.

It was helped by the streaming of all five Super League fixtures for season-ticket holders of the clubs involved. In total, there were 45,796 sessions from 17,972 users.

With more than 40,000 unique users since the start of May, OurLeague is also on course to beat the monthly record of 65,105 set in April, from a total membership which is now approaching 190,000.

Both 1895 Cup semi-finals on Sunday week, June 5 – York versus and Swinton at 2pm and Featherstone versus Swinton at 4pm, will be streamed live and free on OurLeague.

Limited numbers of spectators will also be present at the LNER Community Stadium and Millennium Stadium respectively.

Tickets for the two ties, which will feature golden-point extra time if needed, will go on sale shortly.

Mark Foster, the RFL’s chief commercial officer, said: “I know anticipation is high with players, supporters and officials of all four semi-finalists as they are 80 minutes away from a trip to Wembley.

“It’s great that fans will be able to attend these mouth-watering matches, and also that we can show the 1895 Cup semi-finals free on OurLeague to a wider audience, as we did in the inaugural competition in 2019, when they attracted excellent streaming figures.

“With the growing membership of OurLeague, and the growing interest in the competition, we’re confident of beating those figures in 2021.”