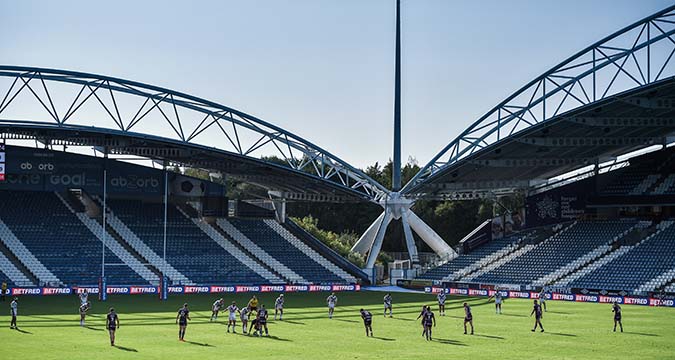 Huddersfield might be playing the waiting game to stage a home match in front of fans.

But managing director Richard Thewlis intends to put the time to good use by observing how other clubs deal with the return of spectators to grounds – so helping deal with problems before they happen.

Nine of the twelve Super League teams – Catalans, Castleford, Hull, Leeds, Leigh, Salford St Helens, Wakefield and Warrington – have had a home game since last Monday, the first time spectators, albeit in limited numbers, could be admitted as government Covid guidelines were eased.

Huddersfield were 26-20 winners at Warrington, where 4,000 fans were present.

Hull KR host Leigh on Sunday, but Huddersfield don’t play at the John Smith’s Stadium until Friday, June 11, when they meet Wigan, who themselves won’t take to the DW Stadium turf until seven days after that, when Hull KR visit.

Huddersfield have around 4,000 season-card holders, and all will be able to attend the Wigan match should they wish.

“The wait is just down to the way the fixtures have fallen,” said Thewlis.

“Our supporters are having to be patient, but at least it provides us with a chance to learn from the rest.

“The transition to having spectators back in stadiums is new for everyone, and there are many guidelines to adhere to.

“We’re at the start of the process, and hopefully we can move forward without any hitches to a situation where larger numbers are permitted.”