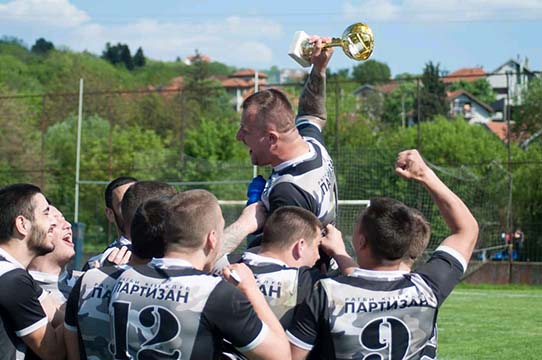 Partisan 1953 proved too strong for Radnicki Nis, winning their third Serbian Cup with an 80-8 triumph at the FC Hero Polet stadium in Jajinci. The black and whites were magnificent, running in 14 tries to lift the trophy they last held in 2017 and also lifted in 1960. It follows on from their earlier success this season in the Serbia Super Cup, when they defeated Red Star 38-18.

RLC Partisan 1953 director, Admir Hadzic, commented: “Our work with younger players is finally being realized. We have invested the most in youth players in the last couple of years and have been dominant in younger categories. All that is coming to fruition now in senior competitions. We hope that we will maintain this pace and manage to win the Championship by the end of the season. We are proud to bear the name of the oldest rugby league club in Serbia.”

Partisan 1953 used the final as an opportunity to celebrate the best to have represented them since their reformation, with international Dzavid Jashari receiving a special award for over 100 appearances for the club.

Some consolation for Radnicki Nis came in the curtain raiser, where their U14s defeated Partisan 44-36. Radnicki Nis director, Lazar Zivkovic, said: “It was a difficult match for our team. We had a lot of injuries after a very tough game with Dorcol Tigers in the Serbian domestic competition – which we won and was important for our survival in the most elite group of the Serbian Rugby League – and we went against Partisan 1953 with a very young team. That our U14 side triumphed, we are really proud of that, and it shows we are building quality for the future.”