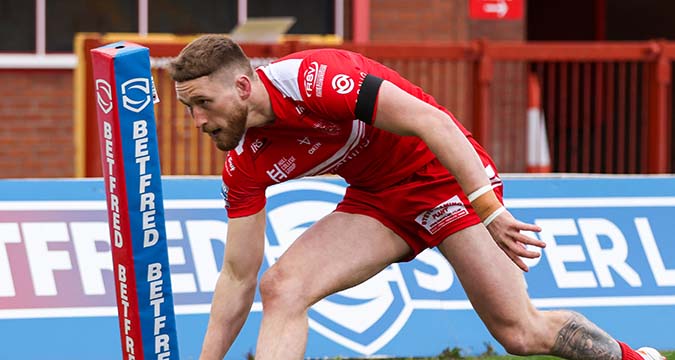 Winger Ethan Ryan has become the latest player to commit his future to Hull Kingston Rovers.

A day after Jordan Abdull signed a new three-year deal, former Bradford Bulls man Ryan has put pen to paper on a new two-year contract that will see him remain at the club until the end of 2023

Ryan made six appearance for the Robins last year, scoring a try on his debut against Wigan, and has added to that this year, featuring in four out of the clubs’ six games this season.

Ryan, who has been enjoying a flurry of regular appearances this season will remain in the Red and White until the end of 2023, with a clear vision of gaining more game time and becoming a regular in Tony Smith’s side.

“Ethan has shown that he is a young guy developing and doing very well. He’s applied himself as we hoped and wished and has shown us that he could be a really important part of our future,” said coach Tony Smith.

“He has developed his body enormously by putting on weight, size, strength and speed. That is one of his big attributes, his speed, but he is keen to learn and he has learnt a whole lot since he has been here.

“I still think that his best is yet to come, and he does as well, and that is part of why we feel that in the next two years he will grow and become a big part of our future and our success.

“It’s all about identifying those young people with ambition and he certainly is one of those that has. I think he can go a long way in the game.

“He is hungry for knowledge and eager to keep on impressing. He’s got a great attitude and we are delighted that he has seen the ambition of the club and got his own ambitions to be successful as well. They all tie in nicely for our own plans.”