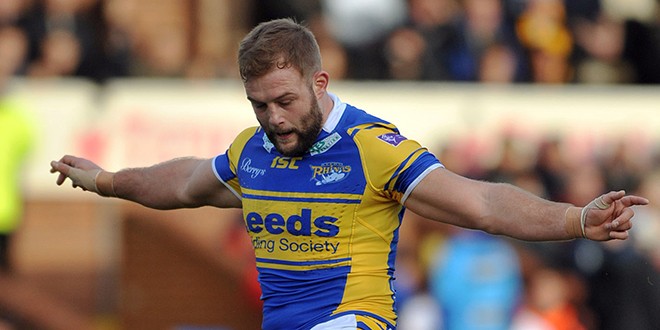 In a continuation of a new series, Wakefield hooker Paul McShane tells Joe Whitley about his life off the field, including a pair of lucky swimming trunks and a fear of spiders

JW: What is your favourite food?
PM: When I was at Leeds, me and Brett Delaney used to go for a meal every Thursday before a game. It was a spaghetti carbonara, a chicken carbonara. We went to the ‘At the Trio Bar’ in Headingley. It’s just good, the chicken is brilliant and it’s full of carbs. It was a pre-match ritual me and Brett had, a little bromance.

JW: What song do you listen to more than any other?
PM: I’m not too sure. I’m not really into music. I just listen to whatever is on the radio. On game days I listen to a bit of R&B. At the minute my favourite artist has got to be Drake. I like to chill out before a match.

JW: Which superpower would you most like to have?
PM: Flying, because I’m too lazy to walk or run. I’d probably fly somewhere warm because it’s too cold over here all the time. It’s very rare that I get away, but I can’t wait to go to Australia again. I toured with the Under-18s Leeds side a few years ago and I would love to go for a holiday.

JW: What is your favourite colour?
PM: Blue, it’s a boy colour. I like pink a lot but I can’t say that can I?

JW: What year would you go to in a time machine?
PM: I’d probably go 30 years into the future and see how things have turned out. I’ll probably be an overweight dad sat on the sofa eating.

JW: What scares you more than anything?
PM: I hate spiders. They’re little and creepy. I know they can’t do anything – I’m bigger than them – but they’re not right, are they? I’ve heard about the False Widows coming up from down south, but hopefully it’s just lies.

JW: It’s my round, what are you drinking?
PM: I normally start on lager just to prove I’m a lad, but I hate it. Vodka, lime and sodas seem to go down well.

JW: What is your favourite time of year?
PM: I like bonfire night; you get wrapped up, get round a fire. And pie and peas.

JW: Do you have any lucky charms or superstitions?
PM: Last year I had a swimming trunk thing. I had a pair I liked to wear for every game, and when I didn’t have them, I was thinking ‘oh no this is going to go wrong’. I can’t find them at the moment.

JW: If you could choose to stay a certain age forever, what would it be?
PM: I wouldn’t mind another crack at school, I struggled with it. It wasn’t the thing for me. Now I’ve matured a bit I wouldn’t mind going back and trying again.

JW: Dogs or cats?
PM: My parents have a cat but my partner doesn’t like them so I have to go for a dog.

JW: TV or a film?
PM: Film. I really like ‘Inside Man’, it’s Clive Owen, he does a bank job. It’s been a few years since I saw it but I loved it. ‘Law Abiding Citizen’, I like that too.

JW: Tidy or messy?
PM: My partner will say I’m messy. I’m weird with how I dress in the changing rooms and stuff, though. I always have to keep my clothes nice and neat, but when I come home it’s all over the place. I just throw them in my wardrobe and my partner has to put them on hangers. I get told off all the time.

JW: Any bad habits?
PM: I don’t know… When I get told to do the pots I don’t do them straight away, I do it in my own time, which I get done for.

JW: What is your favourite animal?
PM: Dog. I’ve just bought a little one off Danny Kirmond, a baby, a French bulldog.

JW: What was your first thought this morning?
PM: Breakfast. I had bacon and tomatoes. I was trying to be healthy, I’ve had a bad weekend. I got engaged to my partner, so we had a celebration. I did it at home, I didn’t want to get down on one knee just in case I couldn’t get back up.

JW: What was your first car like?
PM: A Peugeot 206, it cost me £2,000 second hand. It was run into the ground a bit. I only got six months out of it. I’ve got a Ford Focus at the minute. When we did the carpool at Leeds [with Ryan Hall, Ben Jones-Bishop and Carl Ablett], it was a week-by-week basis so you drove just one week in a month. We were all tight and it saved money. It took 10 minutes to pick everyone up as we all lived close to each other. Luckily the Wakefield training ground is the same distance away from me as the Leeds one, just 20 minutes.

JW: Do you have any hobbies?
PM: I tried golf but I can’t play it. I used to just hit the ball and hope for the best. Me and Ben Jones-Bishop tried to get into it a bit but it didn’t go according to plan. I like football too, but I’m a bit too heavy.

JW: What is your earliest memory?
PM: As a kid of about six I was energetic and I lived in front of a field; my parents and grandma chucked me onto it with a rugby ball.

JW: What is the greatest moment of your life?
PM: I’ll have to say asking my girlfriend to marry me because she is next to me listening, but taking part in the World Club Challenge against Manly Sea Eagles, that was special. Not much else really, I’ve got a pretty dull life. Oh, buying my house. That’s a pretty big step.

JW: Who is your best friend in the game?
PM: I get on with Brett Delaney a lot. And I have a mate called Jason Walton who just signed at Salford; we went to school together. Obviously the carpool lads too, but Chris Clarkson, we’ve been close a long time. We both signed at Leeds at 16 and played with each other from 13 upwards. An 11-year relationship. I’ve warned them all if they don’t see me at least twice a month I’ll never speak to them again. Leaving is tough, it’s sad, but it happens. You’re very lucky if you get to stay at one club throughout your career.

JW: Which pro has the worst dress sense?
PM: Ryan Hall. He wears Ugg boots all the time, they’re for girls. I don’t know why he wears them. He thinks he looks cool.

JW: Ryan Hall said Jamie Jones-Buchanan is bad too. Does he have a point?
PM: Jonesy colour co-ordinates, Ryan doesn’t. He just throws anything on with his Ugg boots!

JW: What do you want to do when you retire?
PM: At the minute I coach an open-age side; I’ve done it for the last two years, at Hunslet Old Boys. I’m not too sure though. If I could stay in rugby it would be great, but a lot of players want to be a pundit or a coach, and I’m not too sure. I enjoy coaching but it’s stressful when I have to tell my mates they’re not playing. It’s not easy telling 33-year-old blokes they can’t play.

JW: What do you hate more than anything?
PM: Ignorant people. If you let someone out when you’re driving and they don’t wave or acknowledge it annoys me a lot. In fact, road rage is a big one. I don’t like it when bus drivers think they own the road because they’re driving something big.