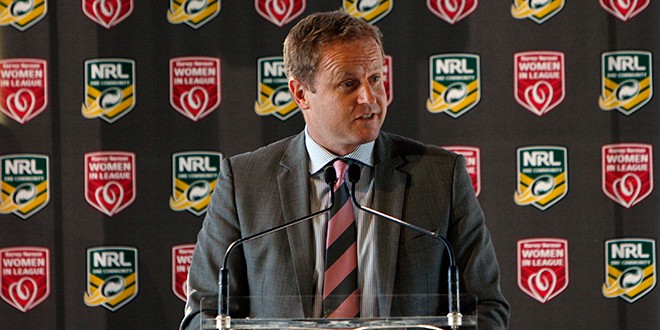 Martyn Sadler talks to NRL Chief Executive Dave Smith about the World Cup and the future of international Rugby League.

MS: You came to England for the later stages of the World Cup. What were your impressions?
DS: “The World Cup has put Rugby League on the map again. Through the structure of the competition we’ve seen some of the small nations competing really well against each other. It has been very exciting and meaningful, and people have really enjoyed watching it. The teams have competed really well, and we haven’t seen big blowouts, by and large. It’s been a great spectacle.
“We saw a semi-final (between England and New Zealand) that was as good as any game you are likely to see. It was a terrific spectacle and an open, flowing game that went to the wire.
“I don’t think you’ll find a better sporting spectacle than that game, which demonstrated that our game is incredible to watch, and when we get it right it blows any other sport out of the water.” MS: What did you think of the support the World Cup engendered?
DS: “From a fan’s perspective the competition has been phenomenal.
“The crowds have been excellent, and the profitability of the tournament has outstripped predictions.
“From the point of view of most of the home supporters it would of course have been great to have England in the final.
“But we have proven in the World Cup that Rugby League is a great spectacle involving many nations that have competed well. It has been exciting for people to watch, and they will want to come back. There is now the sort of momentum you just can’t build out of thin air, and we need to build on it.”

MS: Where does the international game go from here?
DS: “There aren’t enough international fixtures. We need more, but we need to be careful in terms of the players’ workload and the domestic competitions of different nations. We have to think how we can do that, but we have to be ambitious.
“If we don’t think about the international spectrum of games, then we are never going to take the necessary steps. We have bid to host the next World Cup with New Zealand and Papua New Guinea, and that tournament is going to broaden our game even further.
“We also have to think about international club games. Fitting them in is a tough issue and we have to think very carefully about the international structure and the structure of our domestic competitions.
“A lot of conversations I’ve had in England have been with the clubs. We need to create a set of international fixtures that develop the game at every level, so that when we come into the World Cup the teams competing get incrementally better, so that it isn’t three teams, but four, five, six and seven teams who can compete at the highest level. Only then will we be as strong and significant internationally as some of our competitor sports.” MS: Is the growing salary cap differential a threat to the development of international club competitions, with the NRL cap set at A$6.7 million (about £3.9 million), while the Super League salary cap is set at about £1.8 million?
DS: “Not necessarily. The top four or five clubs in Super League are very competitive and we need to maintain that strength. The Leeds-Melbourne game was very close, for example, and could have gone either way. I actually think the English game is in pretty good shape.

MS: So how can the international game be strengthened?
DS: “I am responsible for the whole game in Australia and, by being on the International Federation, I am responsible for the game internationally. Obviously there’s a balance there, but I’m really keen to see the game grow in England, France and the Pacific Islands. If we can align the competitions across the world to give them an affinity with each other, then we will improve the players and the talent base, as well as referees and coaches.”

MS: Will the Aussie clubs make sacrifices for the international game, such as having blank weekends during the season, in the way that the English Premier League football clubs do?
DS: We have the most amazing Kangaroos side, the best of the best, the most talented football players in our country. The Kangaroos are the pinnacle of our sport in Australia. We want to ensure that in the NRL there is no greater honour than

representing your country. That will be a push for us over the next five years, and we want the clubs to buy into it.
“We want the international game to grow stronger, and whichever country you are in we want to help you. We will do that because we want a stronger game.
“We want a very strong domestic competition, a very strong Origin competition, and we want a strong international competition. We also want clubs that co-operate and compete across international borders. That would mean that the game gets stronger, and there would be a chance of making France great again, as well as making South Africa great and the Pacific Islands great.
“If you don’t join up all of those dots, and you don’t make it so that the pinnacle of your career is to play for your country, then you’re probably not going to take the game where you want it to go.

To read the full interview, buy this week’s League Express newspaper either in your local newsagent, or here.