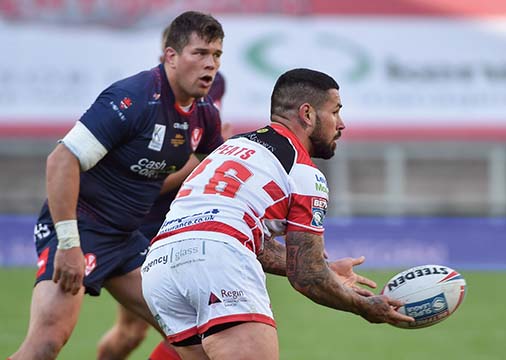 Leigh Centurions might have fallen to their fifth Super League defeat in a row on Friday night, but hooker Nathan Peats can see shoots of positivity in his under-fire team.

Leigh were beaten 22-12 by St Helens, but pushed the defending champions hard throughout the contest at the Leigh Sports Village.

Peats, who joined the Centurions at the end of March after departing the NRL, can see signs of gradual improvement.

“They were probably not up to their standards early on, but I think that’s because of the pressure we put on them,” the ex-Gold Coast Titans forward said.

“We defended really well and held it to 6-6 at half-time and then the first ten minutes after half-time was pretty costly. I think they scored a try when they had twelve players and then got another try straight away and that hurt us a bit.

“With the intercept try we were back in the game and those good teams just find a way to grind out a victory in the end. Obviously it’s disappointing to lose, you don’t celebrate losses, but it was definitely a better performance than the week before.

“If we had played to that standard against Salford we would have got the win pretty comfortably. But we just have to show up like that every week.”

It doesn’t get any easier for the Leythers with a clash next up against last year’s Grand Finalists and local rivals Wigan on Monday May 17.

But the former NSW State of Origin hooker believes it is all about improvement for his side throughout the year, considering the circumstances the club finds itself in.

Beating the drop back to the Championship remains the number one goal, according to Peats.

“It’s just about building on that,” the 30-year-old said.

“It’s a pretty inexperienced team. A lot of the boys have played a lot of Championship games, but the Championship is a different standard to Super League. It’s just about learning to deal with it when things don’t go our way.

“I’ve been here for three or four weeks now and there’s been times during the season where we give away a penalty or make an error and it leads to a try, and then we repeat that and it’s just a domino affect. We have to find a way to be a little better when the pressure’s on and it’s not going our way, that’s what the good teams do.

“It’s all a learning curve so far and there’s still a long season to go. The main goal is not to get relegated – it sounds sort of negative not to come last, but you have to be realistic as well and that’s the main goal of the club obviously with getting the late notice to come into Super League. It’s a team that’s been put together late and we’re trying to get some victories.”