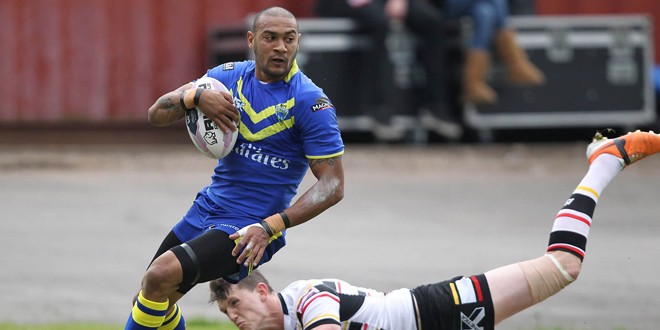 Warrington Wolves’ winger Kevin Penny has agreed a new two-year deal with the club until November 2017. Penny, 27, has made 21 appearances this season crossing for 15 tries, including a number of acrobatic displays in the corners.

The locally-born winger has spent time away from Warrington earlier in his career – at the likes of Wakefield Wildcats and Swinton Lions – and away from the game, but he has found his feet this season competing for a place in the squad each week.

Head of coaching and rugby Tony Smith said: “Kev’s been terrific since he had the opportunity to return to us; he’s played some really strong games. He’s far from the finished article but he’s shown he’s still progressing, still learning and has got some terrific attributes that are going to make him a really competitive winger in our roster for next year.”

Penny said: “I am delighted to be here for the next two years and hopefully more. I’ve been on an incredible journey so far and I’m glad it’s not over yet. The club is moving in an even bigger direction and I’m honoured to be a part of that moving forward.”

In other squad news, French centre or second rower Benjamin Jullien has also joined the ranks agreeing a full-time contract for the 2016 season.

Jullien, 20, joined the club on trial earlier this season and has impressed at partner club North Wales Crusaders since June. He came through the ranks with French club Sporting Olympique Avignon and was part of France’s squad for the 2014 European Championships. He has also spent some time in Australia with Brisbane Broncos’ feeder club.

Smith said: “Benjamin is a really exciting young prospect who has already represented his country. He came as a trialist and has earnt the respect of his fellow players and coaches. He has been on loan with North Wales Crusaders where he has picked up a number of man of the match awards. He is a versatile young player at home at centre or in the back row, and I really think he has developed enormously in the short time he has been here, enough so for us to recognise that he is a good prospect for the future.”