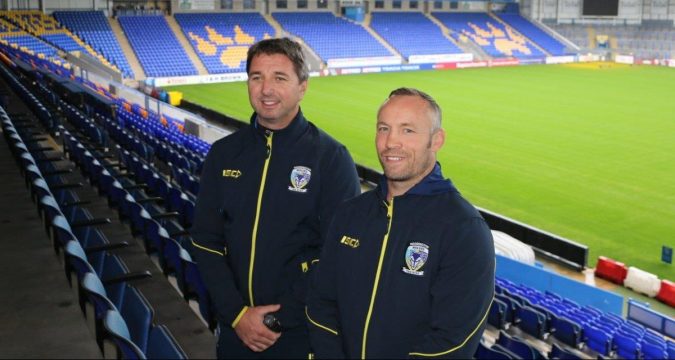 In this Monday’s League Express, writer Aaron Bower sat down with Warrington coach Steve Price for an exclusive one-on-one to discuss why the Wolves was the right club for him, recruitment and his goals at the club. Here, in full, is that interview.. enjoy!

Aaron Bower (AB): Steve, welcome to Warrington. Why was this the right opportunity for you at this stage of your coaching career?
Steve Price (SP): It’s a club which has some proud history behind it. It’s a club that I’m very passionate about and I feel that where I am in my career, it was the correct opportunity after consulting with my family. The things I’ve learned in the past, I feel that I’m a lot more steeled as a person and a lot better coach for what I’ve been through. It’s a club which has outstanding resources and facilities, there’s a playing group there with a good mix and I just felt that it needed only a couple of changes.

AB: What changes are you referring to?
SP: Well, primarily that relates to the coaching staff and the setup. I’ve brought Andrew Henderson in from London Broncos, Kylie Leuluai from Leeds – a guy who has been highly successful there in that organisation. Then you’ve got Lee Briers still here, someone who has been very successful here, and I think it’s important I get different personalities in my coaching staff. I’ve got that, and together, we’re looking to build into the future. I understand the expectations surrounding the club – I’ve been involved with clubs like that in the NRL – but it excites me.

AB: Has the prospect of coaching in Super League always been on your radar at some stage?
SP: I’ve watched a lot of the British game as a young fella, and always looked up to it. I grew up loving watching guys like Ellery Hanley, Shaun Edwards and those types of players. Being involved in two World Cups over here, I understand the make-up of the game and it really excites me. The people over here are very lovely and friendly, and I definitely feel it was the right time in my career to have a crack at it.

AB: The resources and the potential here seem huge, that as head coach must excite you?
SP: For sure. It’s a club that has got a lot of up-side to it. They’ve a very passionate fanbase and I think I actually underestimated the town a little bit – I thought it was smaller than what it was! I’ve been driving around and got lost about 50 times already, but it’s been great. The boys and the club have ticked all the boxes for me in the short amount of time I’ve been here so far.

AB: It’s widely accepted last year was a severely poor one for Warrington – how confident are you that with just a couple of changes, as you put it, the club can be back at the top of Super League?
SP: Very confident. I’d like to think we can grow as a club and as a team; what’s happened in the past has happened, I can’t control that but I can control that when Warrington players cross that white line every week, the fans are going to have a team that they’ll not only be excited about, but they’ll have a team their town can be proud of. We’re trying to become a team who are going to be extremely tough to play.

AB: Andrew Henderson arrives as your assistant, someone who is very well thought of in this country. What will he bring to your set-up in 2018 and beyond?
SP: He’ll bring experience of the British game – he’s played all over the country since he was a young bloke and he’s been coaching for a number of years in the Championship. He’ll bring that wealth of experience which I currently don’t have about the British game. The same goes with Briersy; it’s exciting for me to get to work with these guys and bring some different mechanics into the organisation and put the puzzle together.

AB: The transfer business you’ve done so far has certainly got the fans excited. To pick out one name, your new marquee player, Tyrone Roberts – how excited should Warrington fans be about him?
SP: Well he’ll fit Super League’s style, that’s for sure. With the season how it is now, you can play 37-plus games so it’s important you have high-quality players fighting for all positions and we have that in the halves with Dec Patton, Kevin Brown and Tyrone. I’m excited about our spine, especially with Daryl Clark in the mix too. I feel there’s a lot more growth in Daryl going forward as a player, and that’s exciting for the team and the fans.

AB: How much do you know about the league structure – it always does appear to be something that takes overseas imports a while to get their heads around?
SP: (laughs) I’m slowly getting my head around it! I’m sure there’ll be times where I’ll still be learning about it.. but jeez, you do play a lot of footy over here, don’t you! With the Challenge Cup fixtures, the Magic Weekend and the short turnarounds at Easter, it’s a lot to take in. I’ve got a fairly good understanding of it and I’m excited to be a part of it. My priority, as I say, is giving the town of Warrington a rugby team they can be really proud of.

AB: You mentioned the Challenge Cup, it’s one thing the Aussies always say they look forward to being a part of – is that a view you share?
SP: Well right now our focus is making sure that when those games come around, we’re ready and we’re prepared after a good pre-season. But you do get goosebumps watching those games back home – especially at Wembley – so that will be nice when it comes around.

AB: Ben Murdoch-Masila, Tyrone Roberts, Si and Bryson Goodwin have already signed – how many more can Warrington fans expect to see arriving?
SP: We’ve got one more spot available in our roster, but it’s a decision I’m not going to rush into because it’s important we get it right. We’re always on the lookout for high-quality recruits and it’s important we get the right culture.

AB: What particular position are you looking to strengthen?
SP: We’re looking for an outside back type of player.

AB: There’s speculation aplenty about Josh Charnley, is there any interest from your end?
SP: As a club, we’re always looking to recruit high-quality players as I say. I can’t speculate on Josh Charnley but if the correct player did come along, I wouldn’t hesitate.

AB: Finally, I understand the family aren’t coming over straight away – they’re letting you bed into the job before they land in the UK!
SP: That’s right! It’s a good opportunity to work extremely hard and get a good understanding of the organisation and things like that. My family have got a few things to sort out before they come over but I’m fortunate my family have been brought up in the dynamics of Rugby League, so they understand what I’ve got to do!