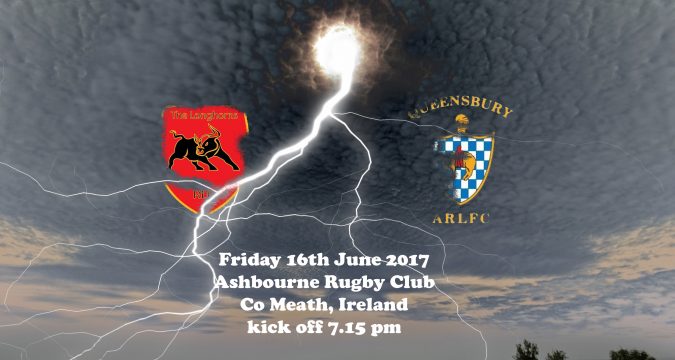 It’s been a rough few months for Professional Rugby League in Bradford.

However as the professional ranks work over their struggles, up the road at Queensbury ARLFC a self-proclaimed “storm is coming”!

No, not the storm you may commonly associate with the village that sits 1100 feet above sea level. The storm is in fact heading overseas, to Ireland.

Queensbury and the Irish kit manufacturer O’Neills have teamed up with Irish Rugby League side “The Longhorns” to arrange an historic International Heritage match. The match, which is due to take place on Friday 16th June, sees the lads from Bradford cross the Irish Sea for a one-off game with the Meath-based Irish club.

The tour has been arranged to promote the sport in both areas and with the Rugby League World Cup set to take place later this year, an Ireland Vs England match up on an amateur level, is mouth-watering. Queensbury ARLFC has recently been revitalised following an overhaul in the clubs hierarchy.

New club Chairman Liam Ruff and a team of dedicated volunteers, which include Director of Rugby and former Leigh Centurion and current Toronto Wolfpacker Greg Worthington, have big plans for the club’s future, who are looking to take as many as 50 players, staff, club officials and supporters over for what promises to be a fantastic occasion. Both clubs have a list of famous names which have donned their respective colours.

The Longhorns boast current Irish international Casey Dunne as an active member of their squad, who recently helped the national side qualify for this year’s World Cup. The men from Queensbury, whose history dates back to 1938 and were formerly known as the “Littlemoor All Blacks”, have current Bradford Bulls captain Leon Pryce and former Bradford Northern stalwarts Brendan Hill, Stuart Reardon and Martin Potts as former names on their books.

With a raft of young emerging talent joining a squad of seasoned regulars Bury are looking forward eagerly to the challenge. After years of uncertainty, Queensbury ARLFC’s new committee, along with the clubs valued sponsors from the local and wider community, have begun to steer the club in the right direction. Indeed the interest and support from the sponsors this year has been unprecedented and has given the club the opportunity to put it back amongst the elite in the amateur game.

The club’s well-documented issues regarding a permanent pitch/club house seem to be coming to an end. For the time being at least. A deal has been put in place which sees the boys move out of their native Queensbury and set up camp at the home of their new partners, Halifax RUFC, for the Yorkshire Men’s Summer league campaign. Whilst not ideal for the club to have the, albeit, short trip down the hill for home games, various red tape issues have forced their hand and facilities at the Rugby Union club are a vast improvement on any available to them at present.

There is a renewed backing and following in the local community and 2017 promises to be an exciting year for the club, which boasts teams at all levels from U7’s, Juniors and Ladies teams through to Open Age.