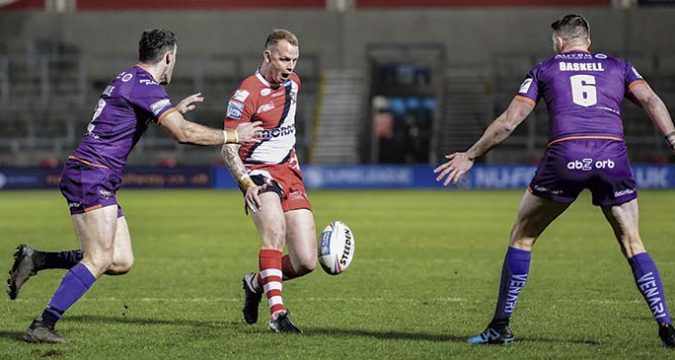 Richard Marshall is coping without two of his most experienced players as he tries to breathe new life into Salford’s season.

Kallum Watkins and Kevin Brown are sidelined for at least two months with knee and ankle injuries respectively.

Halfback Brown, 36, has confirmed he will retire at the end of the season, but he insists he has enough left in the tank to return from surgery to reinforce the Red Devils for the later stages of the campaign.

Centre Watkins, 30, whose form had got him back into the England reckoning, ruptured a ligament during the 62-18 home defeat by Warrington last month.

Marshall revealed he played on with the injury, calling him a “warrior” and adding: “What a tough competitor he is to play on with no medial ligament.”

Salford signed former Leeds and Gold Coast Titans star Watkins on a three-year deal in September. He had been due to link up with Toronto, but the Canadian club withdrew from Super League.

He featured in the 2017 World Cup final, in which England were beaten by Australia, and has topped 360 games at club level.

Brown wrote in a social-media post: “It will be my last year as a professional player.

“Thanks to everyone who has played a part in helping me since being the age of six. I wish it didn’t have to end but time slows for nobody, I’ve loved every minute.”

Marshall moved to bring in cover for Watkins by signing Ben Davies on loan from St Helens.

The 21-year-old former Widnes player made one appearance for Saints last season, when Marshall was assistant to coach Kristian Woolf.

Salford have suspended Krisnan Inu for two months and fined him four weeks’ pay for a social media comment that “brought the club into disrepute”.

The 34-year-old former New Zealand centre made a post relating to former Parramatta teammate Jarryd Hayne’s conviction and imprisonment for five years and nine months in May for sexual assault.

Inu was found guilty by the RFL of a breach of social-media conduct, but have deemed Salford’s own penalties following an internal investigation to be sufficient and will not impose further punishment.

Salford’s disciplinary panel ruled that Inu’s comment had “brought the club into disrepute”, but backdated his ban to his original suspension day last month.
Inu must now attend a club-imposed mandatory education programme.