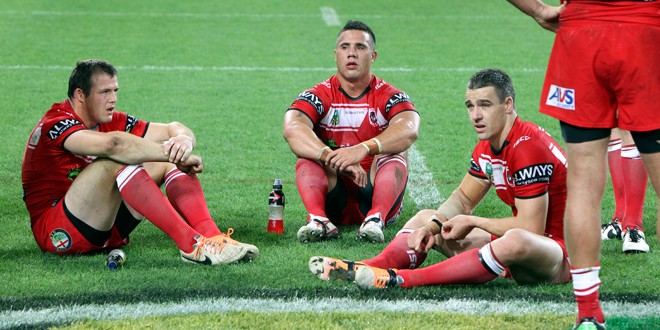 An NRL investigation has revealed that Melbourne Storm’s 80th minute match-winning try against St George-Illawarra Dragons yesterday should not have counted, as the full-time hooter sounded before the last play of the ball.

In real-time, it was impossible to tell whether the siren or the play of the ball came first, but the referee gave the benefit of the doubt to the attacking team, Melbourne, who scored to take the lead and the two points.

In a statement, the NRL said referees performance Tony Archer used freeze frame technology to determine that the siren sounded to end the game less than a second before Melbourne played the ball.

He said: “The siren and the play the ball were all but simultaneous. But, technically, the siren sounded a split second before the Melbourne player ‘heeled’ the ball. So, in that sense, the referee’s call was wrong and the final play should not have proceeded. We were only able to work this out by going through the final moments of the game frame by frame so you can appreciate how difficult it would be for a referee to make a call with that degree of accuracy out in the middle.”

The NRL’s Head of Football, Todd Greenberg said the governing body are looking at several measures to try to improve timing issues in games, and suggested linking the official time clock to that used by the television stations covering the game so fans have an accurate countdown. He said the video referee and timekeeper may also give the on-field referees a verbal countdown through their earpieces during the final seconds of the game.

“This might help in some cases but I don’t think you can ever guarantee that the correct call will be made when the siren goes at virtually the same time as the play the ball,” he said.