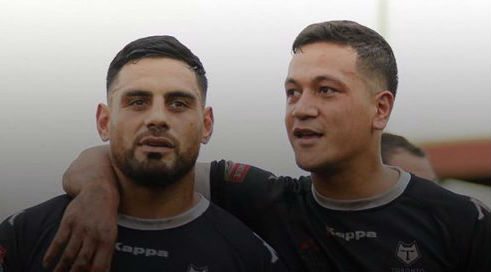 Toronto forward Reni Maitua has retired for a second time after making just eight appearances for the Wolfpack.

The 35-year-old joined the club on a short-term deal to help during a major injury crisis and impressed as Toronto went unbeaten with him in the team.

However, he suffered a syndesmosis injury during the club’s victory over Batley, which kept him out for the remainder of his contract.

But with the likes of Cory Paterson and Andrew Dixon recovering from injuries, Maitua has stepped away from his playing commitments to take up an off-field job with the Wolfpack as their Player Welfare Manager.

“Moving forward I have the privilege of being able to help create a culture and brand that represents Toronto and Canada as a whole as well as supporting our players and staff through any life experiences, both good and bad, on and off the field.

“I’ve certainly been through the very highest of highs but also the lowest points in life. I don’t need a degree to share my own personal triumphs and failures.

“To put a smile on people’s faces is extremely rewarding and part of my vision is to make everyone in our team at least 10% a better person in life. This will hopefully help for the greater good and our team in our community.”

Head coach Paul Rowley added: “Bringing Reni to the club was always to initially cover the injury to Cory Paterson in game one whilst adding a short-term injection of experience and professionalism to the group.

“For a club still in its infancy but motivated to progress at pace, we required a respected and well-connected person to act as a conduit to the player pool in the Southern Hemisphere, this was the second but equally important reason for bringing him to Toronto.

“With Cory’s return to fitness last week the time for Ren to step over the line and into a new exciting role within our off-field team has now arrived.

“Reni will also work within other aspects of the business providing support to players and coaches and enabling us to add a world class person in our effort to enhance our commitment within the community.

“I’d like to thank Reni for his efforts and commitment on the field and for wearing our jersey with pride and now welcome him to the staff.”