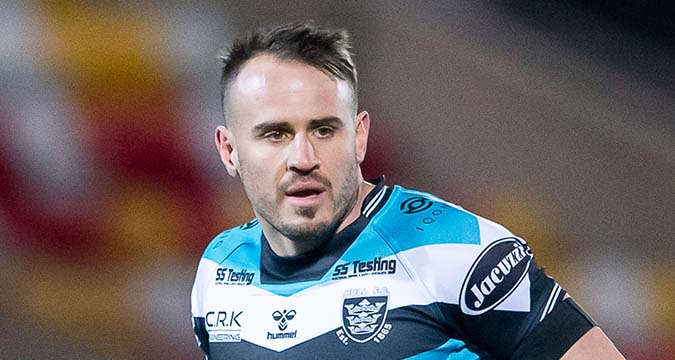 Josh Reynolds is eyeing a maiden trip to Wembley as Hull seek a spot in the Challenge Cup final. The Black and Whites take on St Helens in the semi-finals at Leigh on Saturday week, June 5.

Reynolds admits it would be “pretty surreal” to grace the famous London ground, which he has never visited before.

“I remember waking up as a kid and watching games there on TV,” he said.  “It just looks like an unbelievable stadium. I’ve played in some pretty big places in my career, but it would be special to go there.”

The stand-off says he has been made aware how important the Challenge Cup is.

“I have realised that a lot of boys in our team had a fair bit of fun in the competition a few years ago,” he added.  “They know how much it means, the whole week of build-up and then you eventually do get to the final, the fans love it.

“We’ve got a massive semi-final against St Helens, which will be a very tough game. But we’ve a big chance.” Reynolds joined Hull in the off-season from Wests Tigers and is enjoying his time in East Yorkshire.

“Obviously I haven’t had the ideal start, getting injured early with my hamstring, but I’ve put a couple of games together now,” he said.

“So that’s going good and I’m enjoying it, and with the easing of the Covid restrictions, life’s a lot more fun.”

Reynolds has noticed one change between Super League and the NRL, with his view that defending teams can get away with slowing down the opposition when on their own try-line.

“I think the referees allow you to slow it down a lot more here I’ve found,” he explained.

“I feel it’s pretty hard to attack on the try-line and score points because they let the defensive teams slow it down.

“But it’s pretty physical, there’s a few blokes in a couple of games going after each other and it’s been really good.  “For myself and us at Hull we’ve got a couple of wins on the back of our defence and we want to keep moving in that direction.

“But obviously we want to add a few more fine-tunes to our attack and be a bit more crisp at times.”