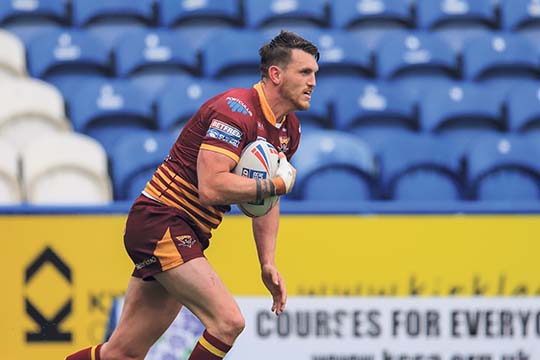 Salford could make a move for Huddersfield utility Lee Gaskell.

The 30-year-old is out of contract at the end of this year and has yet to be re-signed by the Giants. With Huddersfield reportedly looking to bring in Salford halfback Tui Lolohea, Gaskell could head the other way.

League Express understands the Red Devils are keen on the ex-St Helens and Bradford player, who has been at the Giants since 2017.

He can play stand-off, centre and fullback.

Gaskell, who made his Saints debut in 2010 and played in the Grand Final defeat by Leeds the following year, spent part of the 2013 season on loan to Salford, scoring eight tries in 18 games.

His three-year stint at Bradford included the Super League relegation campaign of 2014 and the unsuccessful 2015 Million Pound Game meeting with Wakefield.

Gaskell, who has played at fullback several times this year, is close to the 100-appearance milestone for Huddersfield, who are also being linked with St Helens halfback Theo Fages.

He may end up remaining at the John Smith’s Stadium, and Giants coach Ian Watson said: “Hopefully Lee’s staying with us, I spoke to him and he’s happy at fullback.”

Huddersfield also have fullbacks Ash Golding and Darnell McIntosh in their squad.

Meanwhile, Salford fullback Dan Sarginson has been handed a three-match ban for a dangerous throw during Monday’s Super League defeat at St Helens.

He missed the home clash against his former club Wigan on Saturday and is also ruled out of Thursday’s home meeting with Warrington and next month’s visit to Hull KR.