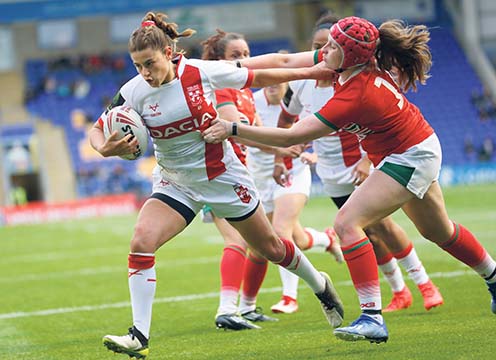 England Women’s coach Craig Richards has set his sights on getting another game for his squad ahead of the World Cup, which is scheduled to take place this November.

A 60-0 win over Wales on Friday night offered many positives for Richards, who knows that more game time together as a squad will only bolster his side’s chances in the tournament.

“What Friday’s game has shown is that we need another tough hit out to takes us into the World Cup,” said Richards, after overseeing the country’s first international match in over 16 months.

“To get another game between now and then is definitely on my wish list, but I’m not sure where we are with it

“We do need another game and if we can’t organise another one, we’ll probably go down the route of a possible v probable from within the squad. Something like that might be the vehicle to use to offer us that next fixture that we need.

“When we come up against the big guns in the World Cup we’ll need patience, and that wasn’t there on Friday. But when you’ve not played for country for nearly two years and then step back out into a field wanting to impress, patience probably goes out of the window. That’s something we need to review.

“In terms of fitness, we feel like we’re getting there and we’re on track to where we need to be, the biggest challenge now will be to get the intensity and getting those tough games that go down to the wire because that it what the World Cup is going to be about.”

Away from the World Cup, Richards would like to see the Test against the fledgling Wales side become a regular fixture in his international calendar.

“I was really impressed with Wales, but with a quality coach in Tom Brindle I knew that it would be a big challenge for us,” added Richards.

“Both teams looked nervous at the start and we then got a real foothold in the game, but massive credit to Wales.

“The distance they have come in such a short space of time is fantastic. This game is needed again next year and year after. They will go from strength to strength, and it will be great for us too.”