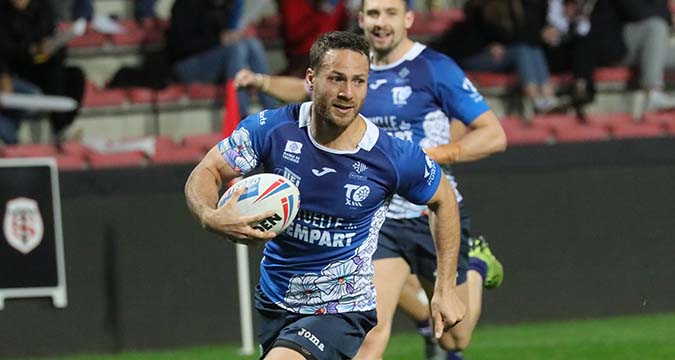 When the 32-year-old started out in the game, he couldn’t have imagined it would take him from South Wales to the South of France via Widnes and provide the possibility of two World Cups with two countries.

For, having already made 15 appearances for Wales, including three at the 2013 tournament, he has joined the Jamaica squad ahead of this year’s event.

“I’d been thinking about the possibility of playing for Jamaica for the past couple of years,” said White, who was born in Cardiff and has Caribbean heritage.

“My grandad is Jamaican and my dad half-Jamaican, and I know how proud they would be if I represented the country, particularly in a World Cup.

“I’m coming towards the back end of my career and I might never get the chance again, so when the opportunity arose I jumped at it.”

White, who began his career in Super League with the former Crusaders club, added: “I would be immensely happy to wear the Jamaica shirt.

“The ball started rolling a few months ago and I had to get all of my documents together. Once I qualified and it all got signed off I was very pleased to be named in the training squad.

“I spoke with the Wales management and I told them where I stood and they understood that it was an opportunity to represent my heritage on my father’s side of the family.”

White reckons Jamaica are capable of raising a few eyebrows this Autumn.

He explained: “They know what they are about, there is a fantastic group of lads there and they have bonded really well.

“They’ve been in a training camp, but unfortunately I couldn’t take part because of travel restrictions.

“It’s the first time a Caribbean nation has taken part in a Rugby League World Cup and the recognition that will give the game over there is invaluable.

“It should encourage more youngsters to take up the game when they realise there is a pathway to the highest level.

“I was really fortunate to have been picked for Wales early in my career and I would have liked to have played more for the national side, but I was unlucky with injuries.

“But to be able to come full circle and celebrate the other side of my family heritage by playing for Jamaica would be a pretty perfect way to round off my international career.”