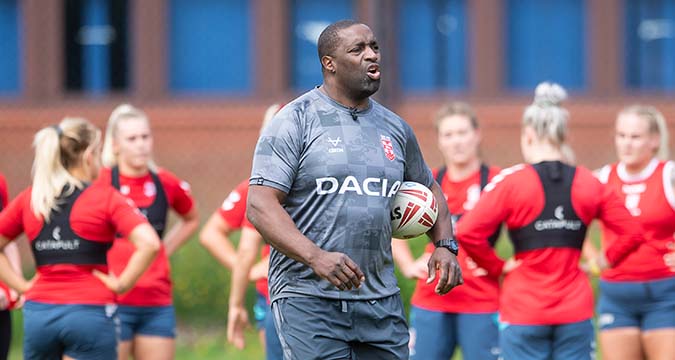 Not only will the game allow Richards and his coaching staff the chance to see where the players are physically, but he believes other factors around the game, will help the players prepare mentally for the tournament that kicks off against Brazil at Headingley on November 9.

Friday’s game at the Halliwell Jones Stadium will be the first time the International side has played since the two-match tour to Papua New Guinea in November 2019, so it is no surprise that excitement is well and truly building for Richards and the squad.

“It’s been such a long time since the players have had the opportunity to put on an England shirt so you can see that the excitement has been building in them over the last couple of weeks,” Richards told Totalrl.com.

“As an international coach you don’t get many chances to put all the training into practice, so it’s fantastic that we’re able to get out there again and have the chance to see where we’re at as we look to kick on for the World Cup.

“We know how we want to play in the World Cup, but we need to test out some of our processes and playing principles before then and this game is a really useful way to do that. We’ll learn a lot about ourselves as a team and it will give us a really good idea of what we need to do to get to that next level.

“One of the challenges for the girls in the last World Cup was landing in Australia and being on the big stage and not being used to the stadia and the crowds. But from day one, all we’ve talked about within the Elite Performance Unit is how to get them ready for that big stage.

“A lot of the England players were involved in the Challenge Cup semi-finals and final, which had the coverage on BBC, and now this game is live on Sky Sports with hopefully a big audience watching us.

“All those extra pressures in a game will be great for the squad as when we get to the World Cup, yes it’s still going to be daunting, but it’s not going to be a million miles away from what we’re experiencing now.

“We have to be realistic looking towards theWorld Cup. We know very little about Brazil and it looks like we won’t get a good look at Canada beforehand either.

“So Friday is ideal for that. We have a bit of knowledge about a couple of the Wales players, but not much else. It means we can just go out there and learn to react to what we face. When it comes to the World Cup we’re going to have to be prepared to step into the unknown for the first two games, so not knowing too much about Wales this weekend is a great way to prepare for that.”

Richards looks set to hand out several debuts in the game, with five previously uncapped players named in the 19-woman squad.

“It’s great to be able to give some of the newer girls to come into the squad a cap and see how they travel and react under the pressure,” added Richards.

“I’m am very excited to see how those debutants step up and perform.

“I have always said that 80 to 90 per cent of the team will be picked on form and these players on debut are there for a reason. They have earned that place with their form in Super League and now it’s about seeing if they can fit into an England system where we ask a little bit more from them than at club level.”