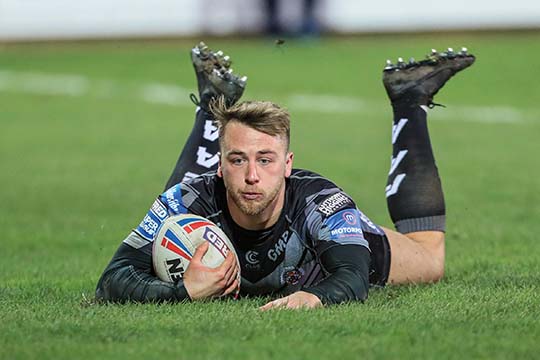 Danny Richardson admits he hasn’t been at his best for Castleford yet this season but he is confident that improved performances are on the way.

Richardson was one of the stars for the Tigers on Friday night as they knocked off Salford 28-18.

The halfback kicked six from seven, finishing the game with an individual haul of 12 points, and claimed a try assist at the AJ Bell Stadium.

The match was just Richardson’s second of 2021, after battling injury, and he had to be needled up to play the Red Devils.

“I came back and played those two games, but mentally just didn’t feel up to it,” he admitted.

“It might have been a little bit earlier than I probably would have liked. But then I had a couple of weeks off and mentally just feel better now and ready to go. And I’m just ready to build on it.

“I feel like I had a decent game. Obviously I still have to get up to match fitness, the boys are five games in and I’m still playing catch-up. I haven’t done any proper training since February and it’s probably shown. But if I can just get a couple of games together now and get up to game-speed I’ll be back in the mix.”

Richardson’s lethal boot proved the different between Castleford and Salford.

“That’s just one part of the game,” he said.

“There’s a lot to my game that I’m working hard, but the conversions help the team. The more I can knock them over the more points I can get for us.”

Powell says Richardson has been working hard in training to improve his game.

“It was good to see Danny play with some confidence, have a hand in tries and his goal-kicking was really good,” he said.

“He’s had a couple of injuries, which have been hard for him, and he’s had a few poor games, but it’s going to happen. He’s still young. He’s working on his game and he just needs to keep working and building his confidence. He’s a quality player.”

Castleford will now face Salford in the Challenge Cup quarter-finals this Saturday at Headingley.

“It’s four games, you win them and you’re at Wembley,” Richardson said.

“We beat Hull KR the other week, managed to knock them off and progress to the next round. We play these boys next week. I’ll imagine they’ll have a few boys back and we’ll do our homework again, rest up this week. It’s a massive week, it’s got a bit of a feel to it compared to normal week. We’re all going to be looking forward to it.”

The 24-year-old is confident his time can handle anything the Red Devils present them with in the Cup.

“They might have a couple of different bits and bobs up their sleeve that they’re ready to throw at us,” he said.

“But I’m fully confident that if we play our game to the standard that I know we can play at, then we can get the job regardless of any changes. We just need to rest up this week and be good to go.”