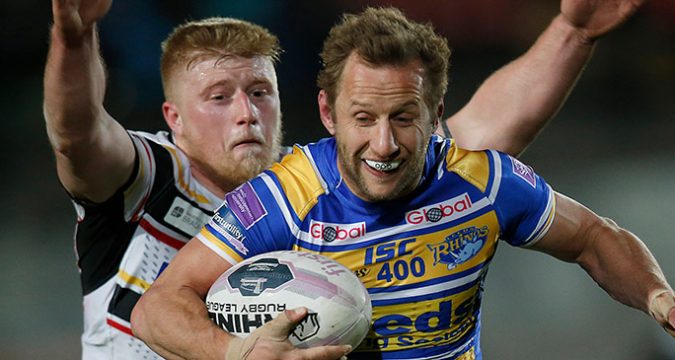 Hot on the heels of being inducted into the Leeds Rhinos Hall of Fame, Rob Burrow will be honoured by HM The Queen, having been awarded the MBE in the 2021 New Year Honours list for his services to Rugby League and the Motor Neurone Disease community.

Burrow was diagnosed with MND a year ago and since then has worked tirelessly to raise awareness and funds to support others who are dealing with the life-shortening condition that, at present, has no cure.

The news has come on the 14th anniversary of Burrow’s marriage to his wife Lindsey, which he tweeted about earlier today, saying: “14 years ago today I walked my beautiful wife down the aisle. Happy anniversary darling. I’m the luckiest man on earth. I love you indefinitely x”

Burrow and his family featured in a BBC documentary showing the impacts of the disease on him since his diagnosis, with over 3 million viewers having witnessed his bravery and determination to battle the condition. He has inspired multiple fundraising efforts for the MND Association, most notably from his friend and former team-mate Kevin Sinfield, who has raised over £2.6 million so far from his 7 in 7 Challenge, which saw him run seven marathons in seven days, each in under four hours.

Commenting on the honour, Burrow said, “It is truly humbling to be awarded the MBE and I would like to thank everyone who has made this possible.

“2020 has taught us all to appreciate the gifts we have and it is my honour and privilege to accept this award on behalf of all the MND community. I hope it gives people hope that we are not ignored and the drive for more research and support to end MND will not stop.

“I would like to thank my team-mates, coaches and opponents throughout my playing career. They shaped me into the man I am.

“The way the Rugby League community has come together over the last 12 months to support me and my family speaks volumes about how special our sport is.

“Finally, I would like to thank my family. I know they have always been proud of me. This MBE is for them and I am looking forward to making another special memory when I am able to receive the award,” added Burrow.