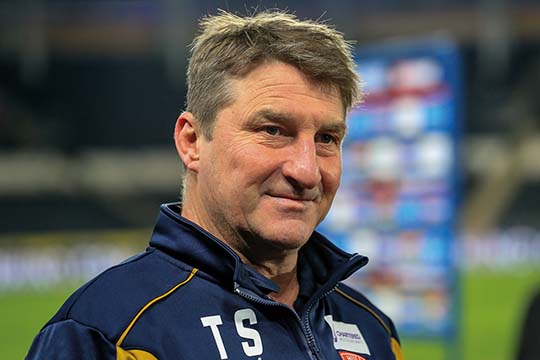 Tony Smith will be hoping his Hull KR side are more refreshed than rusty when they head to St Helens on Friday.

It will be the Robins’ first game in five weeks following five successive postponements due to Covid issues.

Their home derby clash with Hull has been called off twice, the first time due to problems in the Rovers camp, the second after Hull had an outbreak.

Matches at home to St Helens and Warrington and away to Catalans have also been postponed, meaning that the Robins have played just ten games, fewer than any other Super League club.

That has broken the momentum created by consecutive wins at home to Leigh and Salford and away to Wigan, who were beaten 18-8.

On the plus side, the break from match action means more players are fit and firing, with only versatile back Ethan Ryan and forward Elliot Minchella in the treatment room.

“We’re in a pretty good position of not having many injuries and everybody pretty close to fit and healthy to be able to have a big campaign for the remainder of the season,” said Smith, whose side have won six of ten Super League games.

Rovers, meanwhile, have signed Dewsbury prop Tom Garratt and Huddersfield back Sam Wood as they continue to build for next season.

Former Giants junior Garratt has penned a two-year deal to start in 2022, with Dewsbury receiving an undisclosed fee for the 26-year-old, who joined from Siddal ahead of the 2020 campaign.

Smith said: “We’ve been really impressed with the form he’s been in. He’s really stood up to a lot of rigours of the Championship and stood out.

“He’s a big strong, ambitious young man with some maturity. Probably in his prime for a prop.

“Tom feels he’s ready for the full-time environment and wants to throw everything into becoming a full-time player and fulfilling his ambitions.

“He’s the right mould of what we’re looking for, to give us more depth and more go-forward.

“I can’t see any reason why he won’t be a success at Super League level, we’ve identified that in his ability but also in his ambition and his drive.”

Wood, 24, who is a centre or winger but has also played in the halves and second row, came through the Huddersfield development system and has topped 40 first-team appearances. He has agreed a one-year contract.

“Sam has been in the Huddersfield system for a while, and we think he’s developed really well. He is looking for a change and he’s got a bit to prove,” said Smith.

“I think Sam sees himself mostly at centre but he’s able to play wing, in the halves and second row. He brings a whole lot of versatility as well as ambition.”

The 37-year-old was recently fined £2,000 for repeatedly breaching the RFL’s social media, safeguarding and Covid policies.