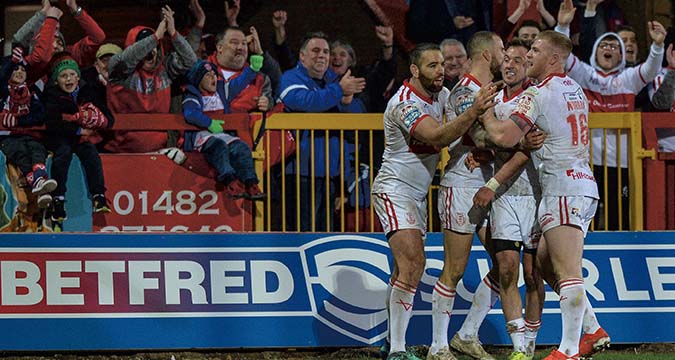 Hull Kingston Rovers could be the next club to rebrand.

Wigan, Salford and Huddersfield, have all launched new club crests in recent months as part of a drive for a more modern image coming from competition executives.

It’s believed that in a review of branding it was determined that change was required to make crests more attractive to modern audiences.

The majority of clubs are understood to be working through that process, with Rovers CEO Paul Lakin confirming they were considering a change.

“With all club brands there’s an evolution. At the moment our club crest is more appropriate for the analogue world and yet we sit in the digital world.

“That is something we’ll also be working on this year in the background. We have spoken to a few influencers around the club to guide opinion.

“Wigan and Salford have updated their crests and that’s something we’re looking at. The feedback came from Sky Sports to all clubs that we need to smarten ourselves up for broadcast and digital audiences.

“It is a balance, but clubs move on. We’ll never be disrespectful to who we are and it’s getting that balance between understanding who we are and what our history is, and having one eye on the future.

“Wigan took a little bit of criticism from a vocal minority for their rebrand, and I don’t envisage anything we look at would be as drastic as their change. But my understanding is that their retail figures were something like 30 or 40 per cent higher than they’ve ever been.

“It’s because you’re attracting a younger market, so it’s getting that balance.”