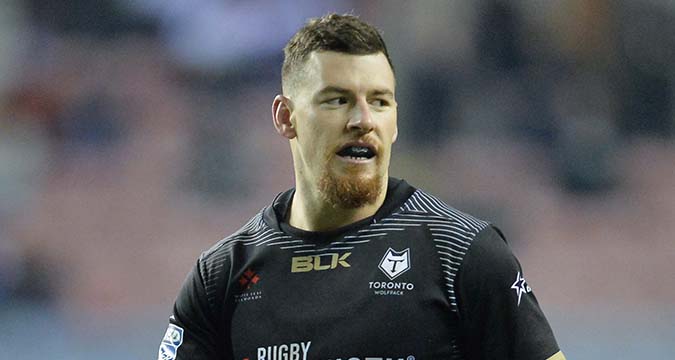 Blake Wallace didn’t make his professional debut until the age of 24 after spending his earlier playing career with semi-professional clubs the Central Queensland Capras and Illawarra Cutters Down Under.

Now 28, he only became a full-time player when he joined the Toronto Wolfpack in 2017, spending four seasons with the Canadian club and thoroughly appreciating the opportunity it gave him, despite the club’s demise in 2020.

In all, he made 74 appearances for the Wolfpack, scoring 50 tries and 42 goals for a total of 284 points, having the distinction of playing for the club from its first season to its last.

Now, in 2021, he hopes to replicate that scoring record with Leigh Centurions as they return to Super League.

“The Toronto experience was really good, I really enjoyed it,” says Wallace.

“To get an opportunity to come over here, play some footy and ride the wave of that through the lower ranks and eventually get promoted to Super League was unreal.

“It was definitely a goal of mine to get a team promoted to Super League.

“It was a bit disappointing to end the way it did, but as a whole it was a great experience.

“I really think it was on the right path to being something bigger and better and it’s unfortunate. But who knows, in the future there could be another Toronto.”

The uncertainty thrown up by the Wolfpack’s exit from the top-flight prompted the club’s players to look elsewhere. And, despite the interest of other clubs, Wallace chose Leigh.

“The Leigh move came about when everything was going pear-shaped at Toronto; I had some people reach out to me and one of those was John Duffy.

“We spoke and I had a chat with some of my other mates and weighed up my options.

“I made a decision that was going to be the best for me and my wife and I’m grateful to get an opportunity to come and play for Leigh.

“I’m excited; it’s a move that’s going to benefit me a lot and I can’t wait to get playing.”

Wallace signed for the Centurions before Leigh got the news that they would replace Toronto in Super League. But the news has made him even more determined.

“The Super League news was really, really good as I was disappointed I didn’t get to showcase my abilities in the top division properly with Toronto.

“I feel like I’ve got plenty to offer and I’m just excited to go against the best players every week. It should be a good year.”

As a new signing at a side which is expected to be around the bottom of the table, Wallace is keen to prove the doubters wrong.

“I want to be the best footballer I can be, which means I’ve got to put the work in and I’m excited about that too,” he says.

“As long as I’m playing good footy each week, I’ll be happy.

“We want to compete and prove that we do belong there.

“We want to show everyone how good we are, so I think we’re in for a good year.”

Meanwhile the Centurions have appointed former Great Britain forward Garreth Carvell as their head of rugby ahead of their return to Super League.

Carvell, 40, will quit his full-time job with the Rugby League Players Association to take up the newly-created role, working alongside operations manager Neil Jukes and head coach John Duffy at the Leigh Sports Village.