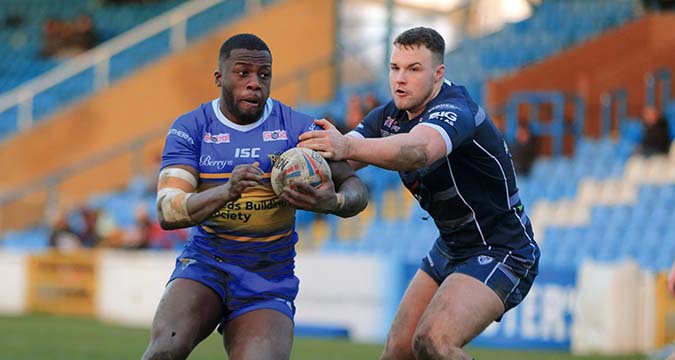 League Express understands the two clubs have held talks about a potential season-long loan for next season.

The Nigerian-born forward, who is aged 20, made his first-team debut for the Rhinos in a Challenge Cup victory over Workington Town last season.

An England Academy representative, he played for England in both of their victories over Australia Schoolboys in 2018.

His performances helped earn him a new two-year contract with the Rhinos and, though last year saw him spend time on loan with Newcastle and Dewsbury, he hasn’t played a senior game this season.

A move to the Robins would provide him with an opportunity to gain Super League experience with the Robins and give Robins’ coach Tony Smith more options in the back row.

Able to play second-row or loose forward, Mustapha would help fill the void left by Harvey Livett, who will join Salford Red Devils next season.

A strong, compact forward, Mustapha’s arrival would help Smith in his quest to bulk up his pack, with George King already secured and set to join the club for the rest of this season.

Meanwhile the Robins announced last week that fullback Will Dagger, 21, has signed a one-year contract extension.

Dagger, who made his Super League debut with Warrington in 2017, has been drafted into the Robins’ matchday squad recently in the absence of the injured Adam Quinlan.

He admits that an improved attitude in training and on the field has earned him his new deal.

“I feel like I’ve improved my game under Tony (Smith) and I’m looking to improve it even more. I love this club, I love being here, so why not stay for longer,” said Dagger.

“Me and Tony had a chat pre-season and I think that’s changed my mentality towards training, the game, and day to day life. Now I have my opportunity I can prove what I have been doing in training. But it’s not just what I do at the ground, it’s what I do away from here as well.

“I feel maybe I’d got a bit too comfortable in my ways and things needed to change. Things have changed at home, and I feel like I needed that kick up the backside to get going again.

“Tony has done that and he’s getting the best out of me. It’s all about mindset; as in the gym, you get out what you put in.”