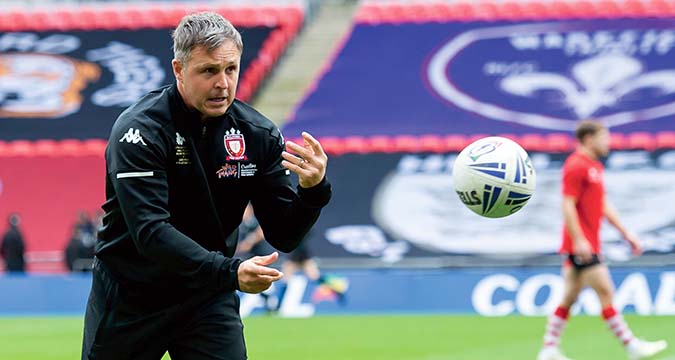 Paul Rowley, by his own admission, likes building things.

Throughout his career, he’s been lured to jobs that have allowed him to start from scratch. Toronto Wolfpack is the obvious case, but even when he took over at Leigh Centurions in 2012, it was very much a rebuilding job after the club had been through financial strife.

Rowley has a new role now, though this is his biggest yet. He has been appointed as Salford’s head of rugby development, talent and pathways, tasked with creating an environment and infrastructure that will allow the club to attract, educate and develop the city’s young stars of the future.

Despite their recent on-field success, the club falls short when it comes to youth development. To put it simply, Rowley is tasked with building again.

“The infrastructure of the club is the last thing to be put in place,” he points out.

“There’s been a team-first priority, getting a squad together to survive. But now with some great leadership at board and senior management level, they’re able to start filling in the blanks and building what’s important.

“When this job was pitched, I’ll be honest, at first I thought about it and I wasn’t sure. But when I sat back I realised it had all the ingredients I look for in a job.”

The challenge of building an entire development pathway is bigger and much more complicated than building a squad.

“We’ve got an army to build here, but we’re already building it.”

The 45-year-old has spent most of his time so far fact-finding and educating himself on the methods and techniques that will best serve the club.

“We keep talking about what we want utopia to look like and working back from there to find out what is viable,” he explains.

“With that comes challenges and the usual one is finance. I’m learning and seeing what the best route to take is, getting the costings and presenting that to the board to see which route we take.

“Without that route, it’s hard to come out with a clear objective, but broadly, what we do has to play a big part in the club’s mission for the future.”

Rowley does have one objective already clear in his mind, which is to ensure young Salfordians are developing while wearing the Salford badge.

“A lot of the advice I’ve had is to not try and compete with our bigger neighbours. But I don’t buy into the theory that we can’t retain Salford youngsters. I’ve seen the passion in the community and the burning ambition kids have to play for Salford.

“You look throughout the big clubs and the kids coming through pathways, they’re not all local kids, quite often the big club can lure the best youngsters from the other areas. The best youngsters from those areas are generally going to become better players in those systems. I don’t think the numbers are always a reflection of the environment but reflective of the badge.

“So the challenge for us is to build the best possible environment so that we can deliver the kids of Salford the best education there is in rugby. We have to be able to keep hold of our best players and the focus before anything is on our doorstep; we can’t afford for the talented kids in our city to leave for elsewhere. We want Salford kids proud to play for Salford. I don’t care how big the other clubs are, we’re a big club and we have to be confident in ourselves.

“I’m very confident that the talent exists and I’ve no doubt at all that with a little bit of knowledge and expertise we will see that come to fruition at Salford.

“We have to provide realistic pathways for kids and the club has to present them more effectively to local youngsters. That’s not just important, it’s essential.

“There’s a good level of talent in this city. There’s Folly Lane, Langworthy, Salford City Roosters and Cadishead Rhinos. They have a rich history, albeit participation levels across the board aren’t huge, but we need to support them.

“Salford has to be the main focus, the golden egg, but in the peripheral areas too. It’s a sport that’s inclusive, teaches discipline and offers youngsters and their families who perhaps don’t have the resource to buy golf clubs or equipment for other sports a platform to improve as an athlete and as a person. If we can attract young athletes from other sports or in close proximity of Salford, that would be huge.

“We’re shaping the future here and it’s lit a fire inside me. We want this to be the beginning of a glorious era for Salford.”