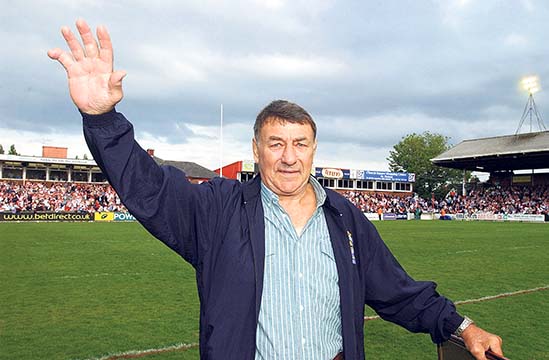 A Saint on both sides of the world

After excelling for Great Britain and St Helens, Dick Huddart moved to Sydney in 1964 to play for St George, who had won eight consecutive Grand Finals.

They would increase that astonishing run to eleven, although Huddart missed the 1964 and 1965 finals with injury before playing and scoring in the decider against Balmain the following year.

After a brief return to Whitehaven in 1970-71, Huddart returned to Australia, where he still resides today at the age of 85.

As for me, playing with St Helens had taken my game on to another level. I’d gone from playing alongside coalminers at Whitehaven to playing alongside Prescott, Karalius, Murphy and Van Vollenhoven at St Helens. How could you not improve?

I played in the second row alongside another Cumbrian in 1962, Brian Edgar, who could make a break and he was a hard man. We won the first Test easily and my try was set up by Brian McTigue, who was head and shoulders above the other props in the game back then. We won the first two Tests and only lost the third right at the end. It was such a shame because we’d have been the only Lions team to win the Ashes with a series whitewash.

Australia won the first two Tests easily in the 1963 Ashes series, which you missed. You were then recalled to the side and helped Great Britain win the third. What had gone so badly wrong without you?

Yes, I came back into the side with Cliff Watson, and we beat them at Headingley. The answer to your question is simple – there were too many Yorkshiremen in the first two Tests. Yorkshire always had too much of a say in Rugby League and too many of their players got into the side. Standards were better in Lancashire then – and maybe they still are now. I think the selectors got the decisions wrong, but maybe I’m biased. When they got their selections right in the third Test, we beat them 16-5. Cliff was sent off after 50 minutes, but he’d made a difference. He was a good forward.

What persuaded you to leave England for Australia in 1964?

I’d fallen in love with Australia on those two tours, and I wanted to go back. I had asthma, which had affected the second half of my career, but coming over here made the asthma easier to deal with. I love Australia so much that I’m still here in my mid-80s. I’ve never regretted my decision.

Playing standards in Sydney were excellent. Even the bush football was a very good standard too – I ended up coaching at Dubbo. I met so many good friends.

I struggled with injuries in my first two years at St George and missed the 1964 and 1965 Grand Finals. I’m a walking robot now. I’ve got two steel shoulders and two steel knees.

You had a young family. Was it hard to settle in?

Not at all. St George was a very close-knit club which made things much easier. Everything was good in terms of us settling in. The kids were young, they loved it and went to school there. And they certainly loved our time in Dubbo, 300 miles away.

You played with three of the first six Australian Rugby League Immortals at St George – fullback Graeme Langlands, centre Reg Gasnier and loose forward Johnny Raper. Tell us about them and which of the three was the best player?

Graeme was a very complex person to get to know, but if you did know him and if he respected you, he was a good bloke. If he didn’t like you, then not so much. Luckily, I got on with him very well and he was one of the best players around. I remember one day sitting on the paddock with a bad knock. Play had gone on. Graeme was behind me, and he shouted, “Come on, get up you Pommy ****!” I was hurt, but it did make me get up and I thanked him later. He is one of the best I ever played with, although I was lucky to play with great fullbacks like Glyn Moses and John McKeown.

Reg was world class and I’d say he was the best of the three. He was just poetry in motion. Once he went into the clear, you could put the glasses down. It would always be a try.

Johnny was a tremendous player. He was a grafter. He never stopped working. He could be a bit self-centred, but he had every right to be, given what he could do. We got on well.

Did you encounter much sledging or worse because of your nationality?

I got a bit of verbal stuff – Pommy this and that – but it was to be expected and it’s no different now. But there was no dirty stuff on the field just because I was English. I was treated well. The Sydney Morning Herald gave me the nickname ‘Tiger’, which was a compliment, and it stuck.

You did play and score in the 1966 Grand Final against Balmain, at the end of your third season, as you became the first Englishman to win the Grand Final over there.

I can picture it now – I can remember all my tries! Abdul [Ian Walsh] went behind the play-the-ball. He put his hand behind his arse to indicate he’d go the other way to what the defenders were expecting him to do. I followed him. He made a half-break and gave it to me on the 30-metre line and I ran it in from there. What a wonderful day!

It was the club’s eleventh Grand Final win in a row. Can you put your finger on how the team was so successful?

We had so many amazing players, of course, and, as well as the three we’ve talked about, there was Billy Smith. He was magnificent. I could go on and on talking about great players at St George, but they also had lots of middle-ability players who could lift their games.

Another reason St George were so successful was they adapted quicker than anyone else to the many rule changes of around that time. Scrapping unlimited tackles was one such change that made it a much better game, and St George really benefited.

Back in England, St Helens won the Championship Final and the Challenge Cup Final in 1966. Who would have won had the World Club Challenge existed back then?

What a game that would have been! I think St Helens would have beaten us. St George were a little too orthodox, whereas St Helens could pull anything out of the basket – not just Alex, but Vince as well. Vince could dominate anybody and could always make a difference at the crucial moment. Alex could do anything at any time. Then there was Duggie Greenall, who was a tremendous centre. God, I’ve been lucky to play with all these players.

Tell us about your experiences coaching in the Bush.

I coached Dubbo Macquarie, who were in the Western Division. It was hard in Dubbo. They were all workers who lived off the land. You could think up new things to try out and then, because they had farms to run, you wouldn’t have everyone at training. I loved it though, and they were some of the best years of my life.

What was behind your decision to return for a final season with Whitehaven in 1970-71.

I took us all back home to try and save my marriage. I went back down the mines as a maintenance fitter, but I’d wake up in the morning and think, “What the hell am I doing here?” The marriage broke down, so I said she could keep the house, and I went down to London, flew to Australia and I’ve been here ever since.

Few have played with as many legends from both Hemispheres as you. What would be your all-time XIII?

There’ll have to be some tough decisions here!  The fullback would have to be Graeme Langlands, who I played with at St George. I’m spoiled for wingers, but I’d have to choose my Great Britain team-mate Billy Boston and obviously Tom van Vollenhoven from Saints.

In the centres, I’d have Reg Gasnier and Eric Ashton with David Bolton and Alex Murphy my halfback pairing.

My forwards are all British! Brian McTigue and Alan Prescott are my props with Hull’s Tommy Harris the hooker.

I’ll move Rocky Turner from loose forward and put him in the second row with Workington’s Brian Edgar.

Then at loose forward I have to choose between Vince Karalius and Johnny Raper, but I’ll go with Vince. I’ve probably said enough about him in this interview for you to understand why!

What do you do now?

I’ve been in Tweed Heads for 24 years now. It’s a lovely part of the country. It’s about 12 kilometres below Surfers Paradise. I’m very happy out here. I love art and I do water colours. It’s one of my favourite hobbies. At weekends, I’ll go 100 miles and I take my camera, take some photos, come back, go through them all and then paint some of them. My pictures are eight by ten inches and I frame them.

I don’t really follow Rugby League now, but it’s nice to hear if my old teams are doing well and I was pleased to hear St Helens are in the Challenge Cup Final.

I’m 85 on 22 June and I can have no complaints. I’ve led an amazing life. I’ve not done bad for a miner from Flimby!

If you missed part 1 of this interview, click here to read it now.