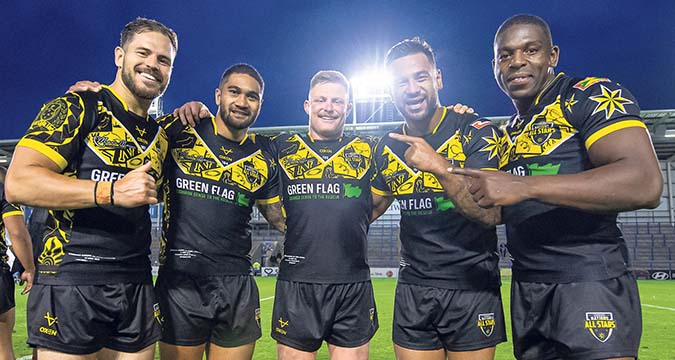 After all the pre-game trials and tribulations, with All Stars coach Tim Sheens claiming he had spoken to almost 40 players in trying to put a team together, the England game against Combined Nations All Stars match turned out to be a highly competitive one, which must have satisfied his opposite number Shaun Wane, despite Shaun’s hatred of losing.

And now the question remains of what will become of this fixture?

Will it be played again next year, or will it be quietly shelved, as the Exiles concept was a few years ago.

Unfortunately none of us know from one year to the next what we are going to see from Rugby League on the international stage.

Jermaine McGillvary has certainly hit the nail on the head in his criticism of the administration of the game.

But on a positive note, it was interesting to see the Facebook comments of Andrew Henderson, who was Tim Sheens’ assistant coach and who currently has a similar role at Warrington, which he is leaving at the end of the season.

I’m amazed that no other club has yet announced that Henderson will be joining them next season.

“A real privilege and pleasure it was to work with this group of players and staff,” he wrote.

“The players delivered a performance to be proud of, deserved the win and gave a good representation of the Combined Nations All Stars.

“Hopefully through their efforts the fixture has gained credibility and the opportunity will be there for others to represent this team in the future.”

Should France play against England?

Should the French team play regular matches against England?

At the moment there would be a fear that they may not be able to compete, but at some point we have to find a way to restore regular international contact between the two nations.

French Rugby League supporters have always responded well to international matches, with good crowds always being attracted to venues such as Toulouse, Perpignan or Avignon and if we are to encourage the further development of Rugby League in France, which seems to be progressing well under the FFR’s current President Luc Lacoste, then we have to grasp the nettle and give them more international fixtures.

Last week Sam Tomkins suggested that the French should play against the England Knights, but I’m not sure that a fixture against a team that didn’t represent the full England side would be a big drawcard across the Channel.

Sam also made the point that there are some fine young French players coming through the ranks at the moment and with Toulouse Olympique challenging for Super League this year, as well as the proposal to host the 2025 World Cup in France, the prospects for the game there are looking better than they have done for many years.

I hope that the RFL can help that progress to continue.

Wigan (at time of writing) have now lost three games in a row.

For most clubs, that wouldn’t represent a crisis, but for Wigan it probably does.

It looks certain that next year the club will have Shaun Wane back in charge, alongside his assistant Matty Peet.

I’m told that there is some concern at the club that discipline around the DW Stadium isn’t as good as it was when Shaun was in charge.

Not everything in the garden appears to be rosy.

And I wonder whether that is one of the reasons for the decision by George Williams not to sign for the club again following his return to this country from the Canberra Raiders.

I was surprised by that decision, but perhaps George knows something that most of us don’t.

Adam Pearson has been around professional sport a long time, both in football and in Rugby League.

So when he issues a dire warning about the future of the game, as he did last week, it’s important to listen to what he says and reflect on it.

“It’s been the hardest time of my career by a long distance,” he said.

“The sport is in its most difficult point that I have ever known it.

“There’s a 35% reduction in the Sky TV money central distribution, which is a massive blow. Everyone seems to be getting better media deals or similar deals and we have lost a third of our income from it. With all that and then the potential of getting any meaningful crowds in for the foreseeable future, it’s tough to take. It’s led to a lot of soul searching from myself, in particular in relation to the future of the club.”

Who would want to be in the shoes of Pearson or any other club owner in the current circumstances?

“The stress of having the responsibility of keeping such an important and historic club going is very difficult. I’ve been in professional sport for over 30 years and this last year has been the hardest I’ve ever known,” he added.

“Sometimes I see a way through it all, and then sometimes I don’t. There’s been a lot of sleepless nights trying to work things out. We have the third highest wage bill in the league and a lot of dispensations above the salary cap, which means it is by far the highest salary commitment we have ever had at the club. But the club is physically shrinking in front of my eyes.

“This year we will make £750,000 loss and probably the same next year. How am I supposed to pay the government loan back when I’m having to bail out the club? Other sports have had grant aid but we get a loan that has to be paid back pretty quickly, but from where does the money come from to pay it back?”

Given all that, it’s not surprising that Pearson laments the decision of Super League clubs not to go with private equity investment, the decision that led to the departure of Super League CEO Robert Elstone. But unfortunately that would have been a mere sticking plaster if the underlying problems were not addressed.

“We have two years now to sort the next deal out before this new Sky TV deal is over and if we don’t get it sorted then I have no doubt the game will be part-time, there is no doubt about that in my view,” he added.

“We can’t prosper and grow without private equity and the sport will wither until it gets to a part-time level. Either that or we get to a point where Leeds because of their stadium, Warrington because of the wealth of the board, Wigan and Saints, it’s just a four team competition.”

But if he is right about the distribution from the broadcasting deal falling by 35% next year, the only way to deal with that problem is to cut costs.

And I would suggest to the Super League clubs that the best way to do this is to cut the overseas quota.Perhaps the salary cap should be split to include an amount payable to home-grown players and an amount payable to overseas players, who are often the most expensive players in a club’s squad.

Is there a better way to deal with this problem?