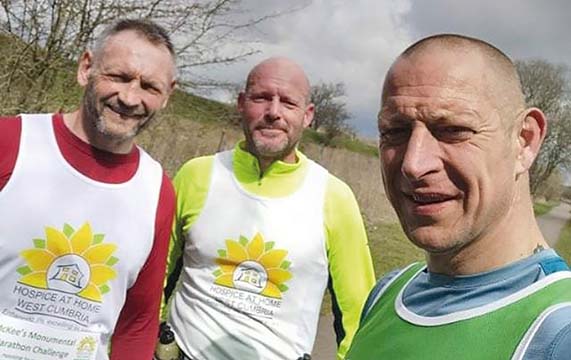 McKee’s final run on Friday will see him finish at Hornets’ clubhouse in West Cumbria after almost four months of running 26.2miles every single day.

His feat of endurance gained national coverage last week and he is hoping for more exposure this week as he raises money for Macmillan and Hospice at Home West Cumbria.

Running alongside him for much of the time has been former Whitehaven and Workington player Kevin Hetherington, who will this week complete 55 marathons, and friend Mike Watson, who will do 44.

The community in their local village Cleator Moor has rallied around McKee and his team, and players from Wath Brow have been among their support runners.

“I played rugby when I was younger, I was never a runner,” McKee said.

“I’ve never been to a running club in my life or run competitively.

“I’m not a runner, I’m a fundraiser – there’s a massive difference.

“I’ve never felt that I’ve bitten off more than I can chew, and I always go back to the reason why I started, which far outweighs any pain or discomfort I feel.

“Back in 1997 my dad was diagnosed with cancer and it was a devastating time for us, it turned our world upside down.

“He was the cornerstone of our family, a pillar of society – everybody knew him and nobody had a bad word to say about him.

“He was a cancer survivor and lived for another six years, but when somebody close to you dies you want to do something in their memory.

This time McKee is doing a further 10 marathons, having done a host of previous extreme challenges.

He has cycled across Brazil, run the coast-to-coast cycling route within 24 hours, climbed Kilimanjaro, trekked through New Zealand and ran from Land’s End to John O’Groats.

McKee also has the support of his young family.

Son Alfie is cycling 26.2 miles for 110 days, Beau – who previously won a national award in raising £35,000 by running for 501 consecutive days – is also taking part, and nine-year-old Minnie does either three miles on the static bike or one on the treadmill.

“It’s a family thing now and my wife Susan is the biggest unsung hero in it all, she supports everyone,” McKee said.

Zoe Ball, Eamonn Holmes and Mo Farah are among celebrities to back his endeavours, and four years ago McKee appeared on Good Morning Britain with Piers Morgan when running the London Marathon to complete his previous century of runs.

Last week a convoy of local wagons and trucks drove through McKee’s hometown, a local brewery has named a Marathon Man beer in his honour and a song has been written by a West End composer to mark his achievements.

Hetherington – who spent almost a decade with Haven and Town having previously been a BARLA international in the same squads as Paul Sculthorpe and Adrian Morley – says McKee’s challenge extends beyond the fund raising, which stands at over £100,000 all together.

“It has brought everyone together and inspired people in the community as well,” Hetherington said.

The challenge started at the end of January and has seen McKee and his team out in all kinds of weather – but he insists that never bothers him.

McKee added: “We run up in Cumbria where there is always bad weather, but I say to the lads and lasses that run with me, somebody today will be ringing the bell at the end of their cancer treatment.

“If they walk outside and see the rain it will be the best rain they ever see.

“It picks you up and refocuses you – however bad things are there is always somebody else dealing with something worse.”

You can sponsor Gary at www.virginmoneygiving.com/GaryMcKee1