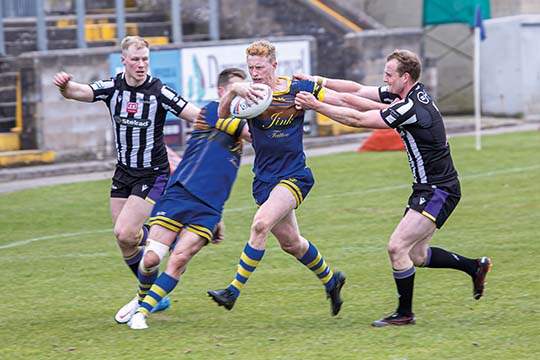 A Scotland World Cup call-up and a Super League deal for next season is the double dream for Whitehaven fullback Lachlan Walmsley.

But the 22-year-old Australian isn’t taking either for granted as he carries on trying to catch the eye after a bright start at the Championship club.

Whitehaven coach Gary Charlton spread the net wide as he built his squad for the current campaign, calling on contacts Down Under.

And Walmsley, from the small New South Wales town of Merriwa, 100 miles North-West of Newcastle, jumped at the chance of a one-year contract in Cumbria.

Having played for development teams at both Newcastle Knights and South Sydney Rabbitohs, he spent last season with South Newcastle Lions under ex-Australia forward Andrew Ryan.

He qualifies for Scotland through his maternal grandfather George, who lived in Perthshire before emigrating to Australia as a ‘Ten Pound Pom’ after the War.

“I grew up hearing stories about Scotland, and the chance of having a shot at making the squad for the World Cup was a big draw for me,” he told League Express.

Scotland face Australia at Coventry as well as Italy and Fiji at Kingston Park, Newcastle, and Walmsley added: “Being involved would be amazing.

“There has been contact with the Scotland management, who have said they are monitoring me, and that’s a big incentive.

“The dream is to make the Scotland squad and get a deal at a Super League club, and I know both those things depend on me playing well for Whitehaven, so that’s my focus.

“I’ve settled well, I’ve been made to feel really welcome in the town, and I’m learning a lot from the coaching team here.

“I’d always fancied coming over to play in the UK, and I see it as another step in my career progression.”