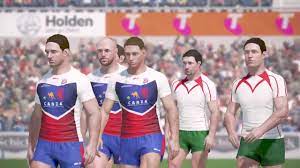 They will make their debut tomorrow travelling to Chrudim Rabbitohs/Orli Havlickuv Brod. Slavia Hradec Kralove complete the competing clubs who, due to the later start because of Covid-19 restrictions will play each other once, the top two then meeting in the Grand Final in October.

Jaroslav Bzoch, captain of RLC Dragons Krupka noted: “We are excited to be back playing. Starting the year against the reigning Czech champions will be a massive challenge for us and an early indication of what level we are at as a team. After a couple of years out of the first division, the club and all of our fans are looking forward to this so much. It feels like life is getting back to something resembling normality again.”

Lukas Hergott, president of the Czech Rugby League Association, added: “We are delighted to finally get going again on the field. After the unheralded past 15 months everyone involved – players, coaches, match officials and club administrators – are all focused on making 2021 a memorable year for Czech rugby league. Remarkably, a lot of clubs have seen player numbers grow during this period and we want to maintain that momentum by delivering the best experience possible and have all the necessary protocols in place.”

Hergott added: “During the lockdown period the CZRLA has also been busy off the field, we have applied for Government recognition for the organisation which will give us better visibility in the country and hopefully access to grant funding.”

The format of the second division will be altered to reflect the changed conditions with four clubs – Vlci Trutnov, Barbarians Letohrad, Lokomotiva Beroun and Jizni Morava (a combined side of RLC Black Angels Hodonin and Mikulov Roosters) playing in a 9s league. Each club will host a one day round-robin tournament with a final round to determine the overall winners taking place on 5 October.

Internationally, the Czech Republic U20s team will face Serbia and Ukraine in a tri-nations tournament in Serbia in July. A squad of 33 players are in training, representing ten clubs. U20’s national head coach David Lahr said: “’Our scheduled trip to Serbia was cancelled last year at the last minute due to the Covid-19 outbreak and we are hopeful that this will go ahead as planned. I have been involved in junior development for a few years now, and to have such a large group of players to choose from is a great achievement for Czech rugby league. A tournament like this is not just about what happens on the pitch, it is about giving these players an experience that can help shape them not only in their sport but in life generally.”

The CZRLA is also running an on-line level 1 match officials course, with practical experience to be gained during the domestic league matches.

This is the year of the Rugby League World Cup