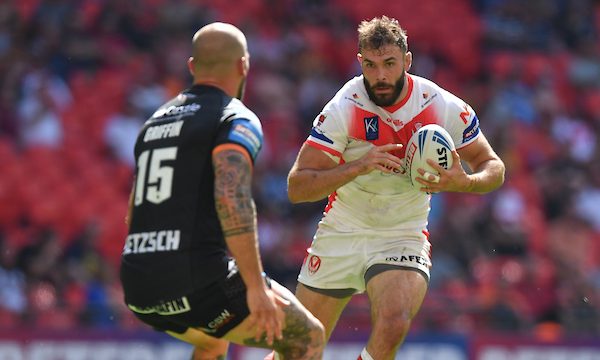 Saints put the Tigers under immense pressure early in the game and went ahead after ten minutes, when Theo Fages touched down a Jonny Lomax grubber that rebounded off the upright, with Lachlan Coote adding the goal.

Saints continued to apply more pressure, but then Niall Evalds, who would go on to win the Lance Todd Trophy as the player of the match, suddenly broke out of defence from deep and linked with Peter Mata’utia, who aimed a well-judged short kick that Evalds was able to collect and touch down.

The score inspired the Tigers and they scored again through Jake Trueman, who collected a bomb from Gareth O’Brien under the posts, beating Fages to the ball with O’Brien adding his second goal to put them ahead by six points.

It was vital for St Helens to score first in the second half, and they did so through skipper James Roby, who touched down after a high kick to the left corner was kept alive by Regan Grace after the ball touched Mark Percival, with Tigers fans thinking that Percival had knocked the ball forward, but the video referee Chris Kendall disagreed and awarded the try, with Coote’s conversion putting the scores level.

From that point Saints gradually exerted their dominance, with Tommy Makinson touching down on the right, Coote adding two penalties to put them 20-12 ahead on 70 minutes, with a late converted try by Kyle Amor settling the match.