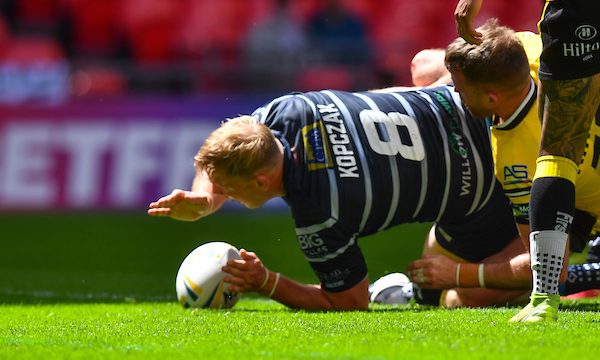 Featherstone Rovers proved to be just too strong for a gallant York City Knights, winning the AB Sundecks 1895 Cup with a 41-34 verdict against their North Yorkshire Championship rivals.

It was a magnificent performance by both teams in sweltering conditions at Wembley, with both sides missing key players, but ultimately Rovers were just too strong for the Knights, whose performance was a step up from their recent form in the Championship.

Many pundits had predicted that Rovers would win comfortably and at times it looked as though it may end that way. But that was to discount York’s fighting spirit and the clever play in particular of their loanee halfback Mikey Lewis, who always looked a threat to Rovers’ dominance.

But it was Rovers’ halfback Dane Chisholm who opened the scoring after seven minutes, although Ben Jones-Bishop responded four minutes later, jumping to catch a Lewis bomb ahead of Rovers winger Gareth Gale to score in the corner, with Kieran Dixon missing a conversion for the only time in the afternoon.

Rovers prop Craig Kopczak extended Rovers lead, but again York replied, this time through Marcus Stock. But as half-time approached Rovers appeared to have taken a vital lead with tries from young winger Jacob Doyle and Aussie halfback Nu Brown, giving them a 22-10 lead at half-time.

York needed to respond early in the second half, and they did just that, althlough Kriss Brining’s try on 43 minutes looked dubious as he appeared to have lost the ball. But there was no doubt about Jason Bass’s touchdown four minutes later that allowed the Knights to equalise the scores after Craig Hall, who won the Ray French Trophy as man of the match, had dropped a York bomb.

Rovers pulled away again, however, with three more quick tries from Doyle, James Harrison and Hall, to give them a comfortable 40-22 lead on 60 minutes.

But York weren’t ready to throw the towel in, and in the last ten minutes they scored again through Lewis, who showed great footwork to touch down, before Chisholm clinched the trophy with a field-goal.

But York had the final say, when Perry Whiteley intercepted a Brett Ferres pass near his own line and ran the length of the field to touch down in what had been a truly memorable occasion.

A full report, photos and reaction will appear in Monday’s League Express.