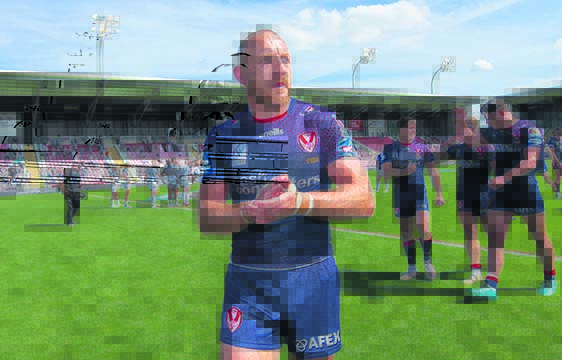 St Helens are one step away from an historic Challenge Cup double.

Within hours of winning the women’s trophy by beating York 34-6, Saints’ men’s team took to the same Leigh Sports Village pitch and booked their final place with a 33-18 win over Hull.

Not since the introduction of the new Women’s Super League has any club held both knockout trophies.

But if Saints can win their first men’s Challenge Cup since 2008 by beating Castleford at Wembley on Saturday, July 17, that’s the feat the club will be celebrating.

“It’s been a long time since a final win, especially for a club like St Helens, who were always associated with cup success,” said men’s captain James Roby.

“We are all aware of that as players and we’d love nothing more than getting our hands on that trophy again.

“Playing at Wembley is a massive occasion and it will be a huge honour for us to go again.

“It will also be a real shot in the arm for the fans who can make the trip and make the most of it to fill the void they have been missing over the last year.

“A potential double has been in backs of people’s minds but it’s not really been spoken about yet. It would be great though.”

For both Roby and Saturday’s woman of the match Emily Rudge, the next logical step forward would be to see the men’s and women’s finals played at Wembley.

“That’s what we’d all love to see happen in the next couple of years,” said Rudge.

“It would be brilliant for the women’s game if it was to be played on that equal platform.

“The set up we have now is a great step forward in the right direction, but I would love to see a level platform of the men’s and women’s finals played at the same venue on the same day.”

Roby said: “I agree with Emily and I don’t think it’s far off.

“It’s definitely going in that direction and I wouldn’t be surprised if both games are played at Wembley next year or the year after.”