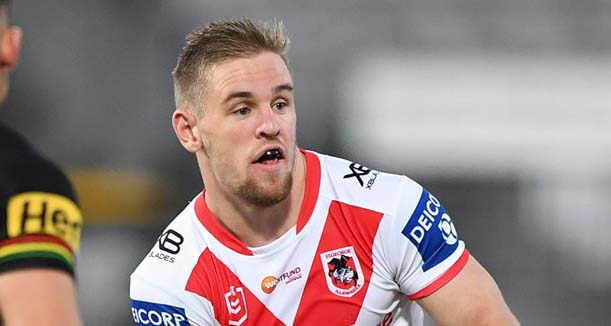 St Helens are thought to be pulling back on their interest in St George Illawarra Dragons fullback Matt Dufty, after the player suggested in the Australian media that he wants to stay in the NRL and that he views Super League as distant second best option.

At the weekend Dufty was one of twelve Dragons players who attended a party at the home of team-mate Paul Vaughan that flouted the government’s stay-at-home orders.

NRL chief executive Andrew Abdo has promised severe sanctions for the players, claiming they “have let the entire competition down”, with suspensions almost certain to happen.

Vaughan and 12 people were handed $1000 fines by NSW Police.

Meanwhile Saints revealed last week that their winger Tommy Makinson had signed a two-year extension to a St Helens contract which ran until the end of next season.

“I have been here over ten years now and hopefully for a long time yet,” said Makinson.

“Pulling on that shirt, with the St Helens fans behind me, is the main reason I love playing for this club.”

Saints Chairman Eamonn McManus said: “Tommy has been a linchpin to the success of the Saints in recent years and continues to be the best all-round winger in Super League.

“It’s tremendous news that he’s effectively committed himself to us for the rest of his career during his testimonial year with the club.

“I’ve no doubt that yet more deserved success lies ahead for him with the Saints and at international level.”